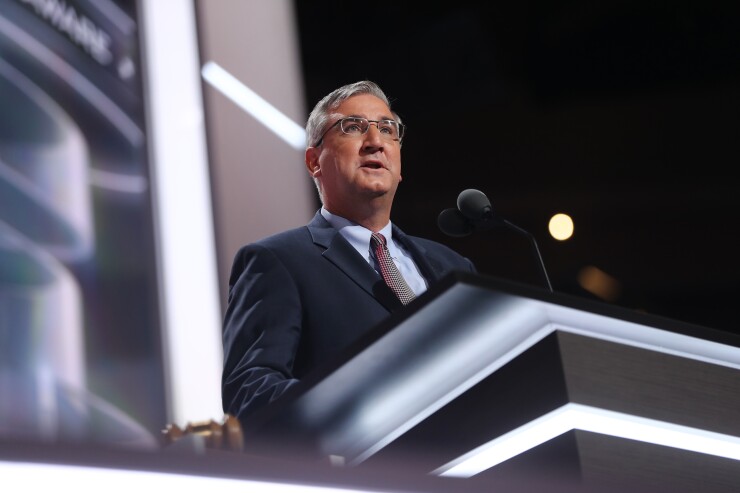 With Indiana revenue collections running $1 billion over estimates with just one month left in the fiscal year, Gov. Eric Holcomb proposed returning that amount from reserves to taxpayers through an automatic tax refund.

Holcomb, a Republican, called for a special session to approve the proposal.

“Hoosiers have real needs right now during this period of high inflation, from the gas pump to buying groceries, and everyone should benefit from the state’s success,” Holcomb said in a statement. “I’ve committed to work with them to call a special session before the end of June to take action to align this second round of returns with our current ATR.”

The proposal would send taxpayers an additional $225 on top of $125 Hoosiers already will receive due to the surplus expectations from the top-rated state’s December revenue forecast.

“By issuing another round of automatic taxpayer refunds, we can provide quick and substantial relief while maintaining the state’s prudent reserves and providing budget flexibility moving forward,” Huston said in a statement.

Holcomb rolled out the proposal Thursday as the state reported May revenue collections were up $209 million from formal estimates set in the December 2021 forecast, putting the current tally for revenues with one month left in the fiscal year up $1.075 billion.

General fund revenues for May totaled $1.7 billion, 13.7% over the December revised estimates but 7.8% down from May 2021 collections.

Year-over-year comparisons to FY 2021 must be considered relative to the pandemic, tax deadlines, and evolving federal policy actions on assistance programs, economic impact payments, interest rates, and more, the report noted. May 2021 numbers benefitted from a delay in the April income tax filing deadline by one month.

Year-to-date general fund revenues hit $18.69 billion, up 6.1% from the December forecast and $1.7 billion over revenues collected for the same period last year.

In December, officials raised the forecast by $3.3 billion for the budget cycle. The extra funds put the state on course to record a $5.1 billion reserve for the current fiscal year falling to $4.1 billion in the second fiscal year of the two-year budget adopted last year.

Holcomb reached an agreement on a revised budget with his fellow GOP legislative leaders who last spring passed a $37.4 billion package for the biennium tapping rising revenues and federal relief to fund infrastructure projects, pay down some pension debt, replenish reserves, and boost education funding.

Democrats had pressed Holcomb and GOP leaders to halt the tax on gasoline to help taxpayers deal with inflation but Holcomb rejected that idea.

The rosier revenue projections accompany the $3.1 billion the state is receiving in direct relief from the American Rescue Plan Act.