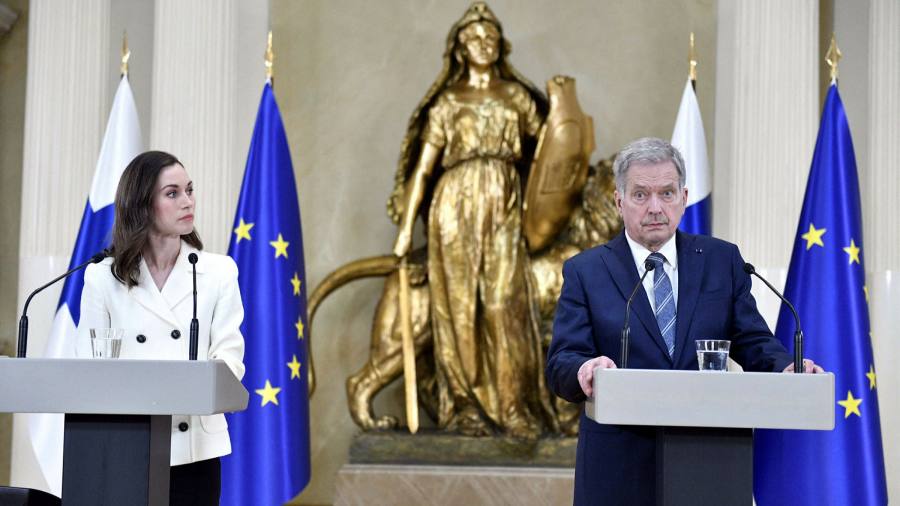 Finland is applying for Nato membership in a historic move that would more than double the defence alliance’s borders with Russia and change the geopolitics of Europe.

“This is a historic day. A new era starts,” Finnish president Sauli Niinistö said at a press conference, as Vladimir Putin’s brutal invasion of Ukraine, another non-Nato member that shares a border with Russia, upturned decades of security thinking in Helsinki.

Finland’s prime minister Sanna Marin said: “We cannot trust any more that there will be a peaceful future next to Russia on our own. That’s why we’re making the decision to join Nato: it’s an act of peace, to make sure there will never again be a war in Finland in the future.”

Later on Sunday, Sweden’s ruling Social Democrats will announce its decision on whether to jettison 200 years of military non-alignment and also submit an application.

Both Niinistö and Marin downplayed fears that Turkey could torpedo Finland’s Nato bid. Turkish president Recep Tayyip Erdoğan said on Friday that he could not take a “positive view” of Finland and Sweden’s potential bids for membership.

Niinistö said he was “a bit confused” after he had a conversation in April with Erdoğan in which the Turkish president had told him: “We will assess it favourably”.

Nato secretary-general Jens Stoltenberg said he was confident Turkey’s position did not present an insurmountable hurdle. “Turkey has made it clear that its intention is not to block membership” of Nato for Finland and Sweden, he told reporters via video link.

Speaking after an informal meeting of Nato foreign ministers in Berlin, he said he was “confident that we will be able to address the concerns that Turkey has expressed in a way that doesn’t delay the membership or the accession process”.

Stoltenberg added that in the interim period, Nato would “look into ways to provide security assurances, including by increasing Nato presence in the Baltic region, in and around Finland and Sweden”.

Antony Blinken, US secretary of state, said he had spoken to his Turkish counterpart about Ankara’s concerns and that after Sunday’s meeting of foreign ministers he was confident a consensus could be reached.

“I don’t want to characterise the specific conversation that we had either with the foreign minister or within the Nato sessions themselves, but I can say this much: I heard almost across the board, very strong support [for Sweden and Finland] joining the alliance,” he said.

Finnish and Swedish membership of Nato would be one of the most important and far-reaching consequences of Russia’s full-scale war against Ukraine.

Public opinion has swung massively in favour of Nato membership in both countries since Russia began its full-scale war against Ukraine in February.

Their potential accession to Nato would transform the security situation in northern Europe and make it easier for the alliance to defend the Baltic countries. It would also more than double Nato’s border with Russia, which has threatened “serious military and political consequences” should either country join the alliance. The Finnish government’s formal decision to apply will need to be approved by parliament, which meets on Monday.

Nato foreign ministers spent Sunday discussing the war in Ukraine and how they can step up aid to the authorities in Kyiv. They also talked about Nato’s new strategic concept ahead of a summit of the alliance in Madrid in June.

This will define the security challenges facing Nato and outline the political and military tasks it will carry out to address them.

Annalena Baerbock, Germany’s foreign minister, said there should be no delay in bringing Sweden and Finland into Nato. “There should be no . . . grey zone,” she said before Sunday’s consultations. “This can’t be a long drawn-out process.”

Baerbock said that many countries had never wanted to join the defence pact “but now they’re being pushed into Nato” by Russia’s war of aggression in Ukraine.

Erdoğan, as the rationale for his objection, cited Sweden and Finland’s support for the Kurdistan Workers’ party (PKK) which has waged a decades-long armed insurgency against the Turkish state. It is classified as a terrorist organisation by Ankara, the US and the EU. Erdoğan said Scandinavian countries were “like some kind of guest house for terrorist organisations”.

But Turkey appears to be alone in taking this stance, with most Nato members expressing strong support for Finland and Sweden’s accession.

Niinistö will make a state visit to Sweden early next week during which the two countries could jointly send their Nato applications.