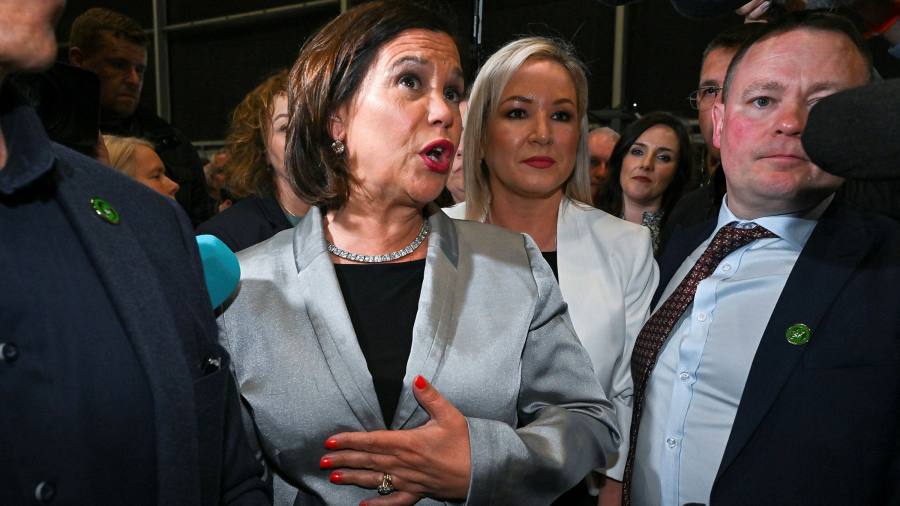 A jubilant Sinn Féin was poised to clinch a historic victory in Northern Ireland’s elections and become the region’s biggest political force for the first time in a century, after more than half the seats to the Stormont assembly were decided.

Sinn Féin, the party long associated with the paramilitary IRA, was clearly ahead of the Democratic Unionist Party, after voters rewarded its laser focus on tackling the cost of living crisis and getting the stop-start executive back to work.

“After the darkness comes the light,” tweeted Sinn Féin President Mary Lou McDonald, who greeted the success with calls to intensify planning for a referendum on Irish unity, the nationalist party’s core policy, over a selfie of herself on a dawn walk fundraiser in Belfast for suicide prevention.

Northern Ireland has had mandatory coalitions to keep the political peace between unionists and nationalists since the Good Friday Agreement in 1998. That accord ended the three decades-long conflict that came to be known as the Troubles when republicans fought for independent rule and loyalists fought to remain as part of the UK.

Acknowledging the seismic shift in politics in a region created for the then unionist majority in 1921, when the island was partitioned, former DUP first minister Paul Givan told the BBC: “Sinn Féin are now the largest party in Northern Ireland.”

That position will give Michelle O’Neill, the party’s leader in Northern Ireland, the right to be first minister, a hugely symbolic change even though that role and the post of deputy first minister are identical.

“I’m not worried about a Sinn Féin first minister — they’ll do more for the people. I never thought I’d say that,” said DUP voter Ryan Ferguson, 28, an unemployed man out walking his dog and shopping in Derriaghy near Belfast. “The DUP are stuffed.”

The DUP has paralysed the Stormont executive since pulling Givan out in February, over its opposition to post-Brexit trading arrangements. It has now vowed to boycott the power-sharing executive until its demands are met, saying the Brexit rules, which put a customs border down the Irish Sea, are undermining Northern Ireland’s place in the UK.

That opens the door to months of political limbo, and potentially new elections at the end of this year or early in 2023, despite voters’ real demands for change. Dissatisfaction with politics as usual helped fuel a surge in support for the centrist Alliance Party, which does not identify as unionist or nationalist, highlighting how Northern Ireland’s long fossilised us-versus-them divisions are breaking down.

Some voters felt the DUP’s veto threat had backfired. “It was the DUP’s big downfall. It feels like they’re the ones constantly stopping things,” said Chloe Brown, 31, a stay-at-home mother, who voted Alliance because “I wanted a bit of change, something more neutral”.

With more than three-fifths of the 90 seats in the Stormont assembly allocated, the Alliance was on course to jump from fifth place to third, leapfrogging the moderate nationalist Social Democratic and Labour party and the Ulster Unionist Party, which both suffered losses.

Ben Allen, who runs a tour company taking tourists around Belfast and to the Giant’s Causeway and the sights of the hit show Game of Thrones which was filmed in Northern Ireland, said DUP leader Sir Jeffrey Donaldson had been right to pull out of the executive as a way of putting pressure on Prime Minister Boris Johnson over the Brexit trade rules.

The UK government, which suffered defeats in local elections this week, has been preparing legislation to allow the UK to unilaterally rip up parts of the agreement, known as the Northern Ireland protocol, potentially triggering a trade war with Brussels.

Allen, based in central Belfast, had moved some of his buses to a safer location, fearing there could be skirmishes from loyalists angry at the protocol and protesting against Sinn Féin’s win.

Some voters remained mistrustful of the nationalist party that has reinvented itself since the days of the Troubles. “I didn’t want Sinn Féin in because they’re the IRA,” said one shopper, Lisa, who voted DUP.

Even one Sinn Féin voter, a social worker who asked not to give her name, worried that the political tug of war over returning to Stormont meant “it doesn’t make a difference at this stage — it’s just disappointing”.

As the DUP began a postmortem into its performance, with calls for the three main unionist parties to pull together to bolster their position, Allen said: “There should only be one unionist party — is this not the opportunity?”

The hardline Traditional Unionist Voice also saw a rise in support but that was unlikely to translate into many more seats under Northern Ireland’s proportional representation system. The Alliance is also demanding changes to the power-sharing mechanism in Northern Ireland.

Politicians elected to Stormont must next week officially designate themselves as “unionist”, “nationalist” or “other”. Even if the Alliance does well, the number of legislators belonging to the “other” camp is still expected to be well behind the two traditional communities.

“People need to stop voting for extremes and start voting for the middle,” said Victoria Taylor, 29, a solicitor. “If Stormont doesn’t go into work, nothing has changed.”