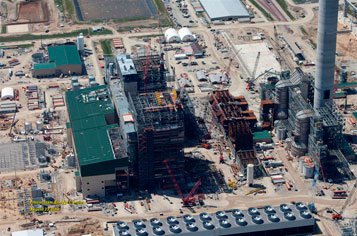 A proposed mandate to shutter the $5 billion Prairie State coal energy campus and a Springfield, Illinois’ plant by 2035 would hit local ratepayers with the double burden of funding new energy sources while still paying down project bonds, a bipartisan group of local lawmakers warn.

Gov. J.B. Pritzker backs a state mandate to shut off the valve on coal generation by 2035 to meet de-carbonation targets included in pending energy legislation. The package stalled during the General Assembly’s spring session that ended last week, but Pritzker said he expects lawmakers will return in the coming weeks for a vote.

Much of the public attention and debate on the bill focused on the level of subsidies the state would provide Exelon Corp. — currently estimated at $600 million over five years — to keep several aging nuclear plants open as the state implements a transition to clean energy generation.

Push back to exempt Prairie State Energy Campus and Dallman 4 from the mandated closure date had mostly played out behind-the-scenes. That shifted last week as backers of the plants financed by bonds that must be repaid under air-tight contracts, whether or not the plants generate power, publicly ramped up their warnings.

Lawmakers and local officials warn the mandate would prove costly for customers, drive job losses, and hurt power grid reliability. They are not seeking subsidies — and none are currently included in the package — just more time to retire the plants to keep costs in check.

“Prematurely shutting down two of the newest and cleanest coal plants in the county that serve as reliable base load generation in downstate is a bad idea,” Doug Brown, chief utility engineer at Springfield’s city-owned utility known as City, Water, Light & Power or CWLP, said at a news conference Friday with a bipartisan group of state lawmakers, local elected officials and representatives of labor.

“In Springfield, we don’t need energy legislation that forces the early shutdown of Dallman 4 while we still have bond payments remaining,” Brown warned. “That’s not the deal we made for our customers or bondholders … we don’t need millions of cost to have to replace the resource too soon” and adds risk to reliability of downtown power grid.

The state’s capital city that has long relied heavily on coal-generated power voted last year to retire between 2020 and 2023 its three oldest, and dirtiest burning units that are major contributors to local air and water pollution. Dallman 4 was completed about a decade ago. The city has more recently purchased wind and solar power and is working with University of Illinois on a carbon capture project funded by the Department of Energy.

Some local municipalities are fine with the 2035 deadline because that’s when their contracts end, but other participants must support contracts that run for another decade or more and include outstanding bonds that extend past that date.

Retiring Prairie State early would mark the latest headache for some of the nine public utilities in Illinois, Indiana, Kentucky, Missouri, and Ohio that issued $4.5 billion of debt, some it under the federal Build America Bond program, to finance their ownership in project.

Peabody Energy Inc. initially sponsored the project in Washington County promoting it as an affordabl source of energy with an adjacent mine and a cleaner one given its state-of-the-art technology at the time. Bechtel Power Corp. built it. It initially carried a $2 billion price tag that rose to a $4 billion fixed cost under the 2010 contract with utilities but cost overruns drove the price tag up to $5 billion.

Higher-than-projected power costs fueled the ire of environmental groups who had long have warned that even with more advanced controls the plant would still be a major national contributor to greenhouse gas emissions that are warming the planet.

The plant became fully operational in 2012 after some delays. The campus includes a two-unit 1,629 megawatt pulverized coal, supercritical coal-fired generating facility at a site with an adjacent coal mine. It initially experienced outages and capacity reductions that were a drag on its operating performance.

The rising costs pushed on to customers triggered lawsuits from local participants, calls for state attorneys general investigations, and subpoenas from the Securities and Exchange Commission. Some communities tried to sell their stake or find other means to back out of the project while others tapped reserves and refinanced debt to soften the blow on rates.

The SEC launched its probe in 2013 with the disclosure that Peabody and Ohio-based American Municipal Power Inc. had received subpoenas related to the development of the project. It was resolved without action in 2017.

Ratepayers in the far west Chicago suburb of Batavia filed a lawsuit accusing project planners of misleading their municipality on the benefits, but it was dismissed.

Rating agencies said initial megawatt-per-hour costs were higher than expected but long-term prospects as the plant’s operations moved up to full speed are beneficial.

The 2035 timing is in line with President Biden’s targets to reach 100% carbon-free emission. Groups promoting clean energy citing data showing Prairie State is the largest carbon dioxide emissions’ polluter in the state and in the top 10 nationally argue it should not be exempt.

AMP Ohio Prairie State 23% stake is supported by a take-or-pay pledge of 68 Midwestern municipal project participants that requires them to cover debt service under power sales contracts that run through 2057. It’s an “unconditional obligation and is payable by participants regardless whether the project operates or not,” according to a previous Moody’s Investors Service report on the utility ahead of a refunding.

“High fixed costs related to SIPC’s PSEC share are likely to continue to burden members financially through the foreseeable future. However, PSEC’s performance has improved, and unit availability and capacity factors are more in line with industry averages, which has stabilized the cost of member power supply,” Fitch Ratings wrote in an October report on the Southern Illinois Power Cooperative which invested in the project.

Illinois Senate President Don Harmon, D-Oak Park, initially opposed passage citing concerns raised by some of his caucus that represent southern Illinois and want more time to retire the plants. He has since backed off his opposition.

California children’s hospital expansion propelled by bond funding
My Stock Dropped Over -20% – What Should I Do?
Mortgage rates drop to the 5% range for the first time since September
‘Crypto summer’ likely to start in Q2 2023, Morgan Creek Capital CEO says
Massachusetts-Based Bankprov to End Loan Offerings Secured by Cryptocurrency Mining Rigs