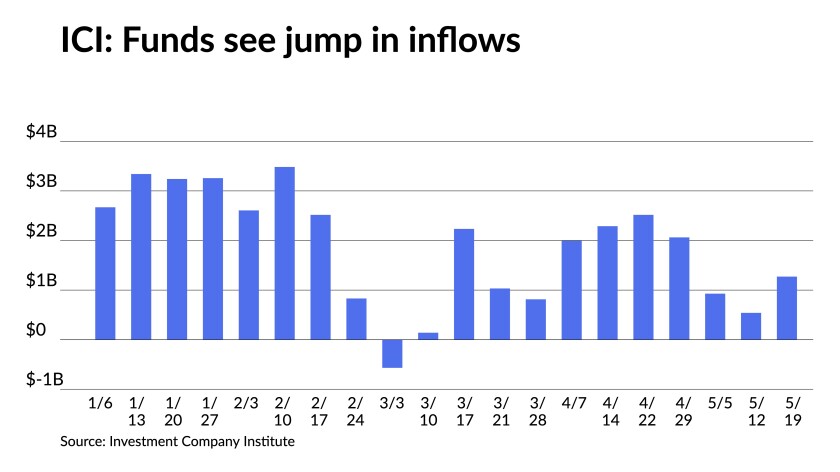 Municipals saw one to three basis point bumps to benchmark yield curves while new issues repriced by as much as 10 basis points lower into a stronger, issuer-friendly market, as the 10-year fell below 1% on most scales.

The Investment Company Institute reported $1.27 billion of inflows into municipal bond mutual funds, marking the 11th week in a row for inflows.

The only week ICI reported outflows in 2021 was the week of March 3 with $568 million. Exchanged-traded funds saw $187 million of inflows versus $309 million the week prior.

New issues fared well Wednesday, with some hesitation on short coupons out longer on those deals.

“Some of the shine has certainly come off the 2% and 3% coupons, but other than that the front five years continues to be a safe-haven area of short duration and yields in 10 years and longer, which offer a 1% handle, continue to entice buyers in an ongoing bull flattener bias, much like Treasuries,” said Refinitiv MMD Managing Analyst Greg Saulnier.

Part of the reason for the lower figure is just how hard COVID hit the primary market in March and April of 2020 and how state and local governments played catch up last May.

Issuers, however, have been slower to come to market this month as they contemplate federal government aid, better-than-expected tax receipts and a wait-and-see approach on potential national infrastructure plans. Thirty-day visible supply sits at $9.15 billion.

All of that is keeping the supply-demand imbalance skewed toward better pricing for issuers while investors have to stomach the ultra low-yield environment it has created. But with higher taxes imminent in some form at the federal level, tax-exempt — and even taxable munis — are still a better alternative for investors seeking some shelter.

These figures will creep higher as the last of this week’s deals price, but the drop in May issuance is clear and explains how fund inflows, improving credit and the reopening of governments are keeping this market issuer friendly.

“What the current pace of inflation means for the inflation outlook for the medium term is less than clear,” she told the Oklahoma Bankers Association, according to prepared remarks released by the Fed. “Many factors that have boosted current inflation seem likely to fade over time. All the same, I am not inclined to dismiss today’s pricing signals or to be overly reliant on historical relationships and dynamics in judging the outlook for inflation.”

Since the economy is quite intricate and has been disrupted by a pandemic, George said, “policymakers will be well served to take a flexible approach to monetary policy decisions, in my view.”

The recent spike in inflation “will be temporary,” said Vice Chair for Supervision Randal Quarles in a speech on Wednesday according to prepared text released by the Fed. “If we’re wrong, we know how to bring inflation down. But if our assessment is correct that inflation is temporary, it would be unwise for us to take actions that might slow the recovery prematurely by trying to stay ahead of inflation, when our best estimate is that we are not far behind.”

Should “my expectations about economic growth, employment, and inflation over the coming months” be correct or if the numbers are stronger than expected, Quarles said, “it will become important for the FOMC to begin discussing our plans to adjust the pace of asset purchases at upcoming meetings.”

While he believes inflation is mostly transitory, Joe Kalish, chief global macro strategist at Ned Davis Research, said it could take six months to a year before we know if that’s true, since supply-chain bottlenecks have to ease.

With inventories low and order backlogs “at record highs,” he said, it will take time for the supply-chain issue to resolve.

“To get wild inflation, employment and wage costs would need to come way up and I don’t see that happening anytime soon,” Kalish said.

Supply-chain disruptions resulting from the pandemic left manufacturers short of certain materials. “At the same time, the pandemic caused consumers to delay certain purchases and rethink how they spend money,” he said.

With the economy reopening, “consumers are making up for lost time,” but their habits have changed. “Given these changes in consumer spending, it will take time for the supply chain, which scaled back significantly at the start of the pandemic, to bounce back and meet demand,” Johnston said. “We are however confident that over the course of the next year the supply chain will rise to meet demand and much of the inflation we are seeing today will subside.”

Gautam Khanna, a senior portfolio manager at Insight Investment, doesn’t see persistent inflation since the home shelter and healthcare components of the consumer price index, have been tame. Those components make up about 40% of the index. “A structural overshoot in Inflation is unlikely unless it is felt in these areas,” Khanna said.

However, Michelle Connell, owner of Portia Capital Management, LLC, believes inflation is “here for the long haul.” She sees “some very real, very large impacts on the economy in the near future,” based on housing and wage prices.

“Home prices have risen an average of more than 38% since 2016 and last year, the average home price went up almost 13%,” she said. Despite low mortgage rates, affordability remains an issue, leaving many “priced out of the housing market,” and allowing rent prices to climb.

“A quarter of renters paid more than 50% of their income on rent, according to a housing study of Harvard 2020,” Connell said.

The minimum wage increases, some dictated by government policy, also raises prices, since the costs are passed on to consumers, she said.

The combined impact of these two factors are “significant” and need to be “taken into account,” Connell added.

But don’t expect the Federal Reserve to react just yet, according to BCA Research. “It will follow its current forward guidance and only lift rates off zero once the labor market has reached maximum employment,” BCA said in a report. “However, once the first rate hike has occurred, the Fed will shift its focus toward inflation and inflation expectations.”