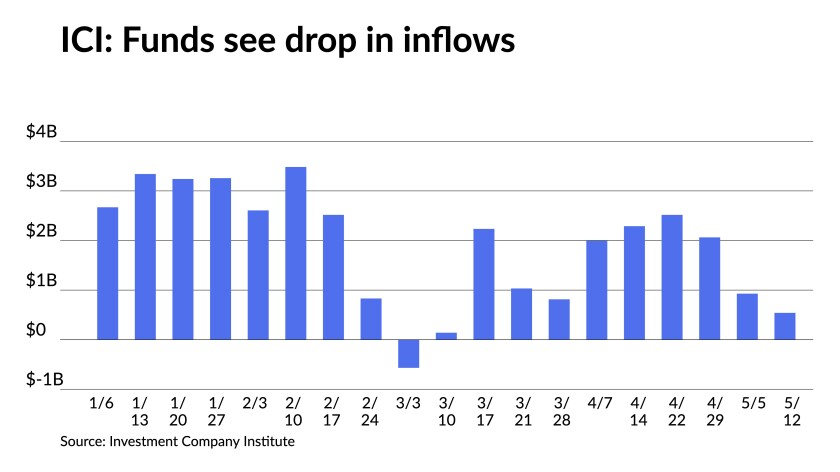 Municipal benchmarks were unchanged top to bottom Wednesday as investors focused on the robust primary offerings, underwriters repriced bonds to lower yields while issuers saw good demand in the competitive markets as munis largely ignored FOMC taper talk and the weakness in U.S. Treasuries that followed the news.

The Investment Company Institute reported another week of inflows, but at a lower clip than recent weeks with $541 million coming into municipal bond mutual funds and $309 million into exchange-traded funds for the week ending May 12. This follows $928 million and $285 million, respectively, the prior week.

FOMC minutes
Discussions about tapering asset purchases could soon be appropriate if recovery continues, a number of Federal Open Market Committee members said at their April meeting, according to minutes released Wednesday.

“A number of participants suggested that if the economy continued to make rapid progress toward the Committee’s goals, it might be appropriate at some point in upcoming meetings to begin discussing a plan for adjusting the pace of asset purchases,” according to the minutes.

The “minutes showed the Fed is finally a lot closer to thinking about raising interest rates,” said Ed Moya, senior market analyst for the Americas at OANDA. “First they taper, then everyone starts the countdown until the rise with interest rates.”

And while the minutes showed the Fed’s optimism, he said, “it will be quite some time before enough substantial progress is reached for them to go full-fledged tightening mode.”

But not everyone saw this as a major change in Fed policy. “Broadly speaking, I don’t see any material new information here with respect to the Fed’s reaction function for tapering QE or their views on inflation,” said Ed Al-Hussainy, senior interest rate and currency analyst at Columbia Threadneedle.

“The nominal UST curve has been rangebound since March, with 5-year yields in a 20-basis-point range between 75 and 95 bp,” he said. “Real yields have been pinned to the lows as breakevens have moved higher alongside risk and commodity prices. As a result, real yields are now rich and vulnerable to an unwind on any marginal changes around the Fed’s taper signal.”

The Fed needs to communicate clearly “its assessment of progress toward its longer-run goals well in advance of the time when it could be judged substantial enough to warrant a change in the pace of asset purchases,” according to “many participants. The timing, of course, would depend on the Fed’s progress toward its dual mandate.

“The committee needs to remain patient as the employment picture improves — however it needs to start firmly laying the groundwork for a less accommodative monetary policy,” said Sean Simko, managing director and head of fixed income portfolio management at SEI’s Investment Management Unit.

He added, the Fed needs to be careful to avoid falling “behind the curve” on inflation. “A gradual increase in rates should be better received by financial markets than a sharp move higher,” Simko said. “Any hint of a planned policy change would be beneficial for the economy in the long run, although it will likely create increased volatility in the short run if the change comes sooner than expected.”

The committee views the risks of inflation as “balanced,” and their economic outlook was “broadly unchanged.”

“On the upside, bottlenecks, supply disruptions, and historically high rates of resource utilization were seen as potential sources of greater-than-expected inflationary pressures,” the minutes stated. “Alternatively, the possibility that inflation would be held down by low underlying trend inflation and a weaker-than-expected response to resource utilization was seen as an important downside risk.”

The anticipated “surge in demand” from the economy reopening, “with some transitory supply chain bottlenecks” would push personal consumption expenditure inflation temporarily over 2%.

”A number of participants remarked that supply chain bottlenecks and input shortages may not be resolved quickly and, if so, these factors could put upward pressure on prices beyond this year,” the minutes said.

Simko remains concerned about “mounting inflationary pressures,” and would like the FOMC to address them. “Viewing rising pricing pressures as transitory is not a long-term solution,” he said.

“We will see higher inflation, above 2% for 2021, and I want to see more inflation data before I change my forecast,” he said. And while “inflation data is very noisy right now,” the Fed president expects inflation above 2% through 2022, with some moderation after that.

With the Fed’s new framework, inflation can run higher than 2% without any policy action since inflation was below 2% for most of the past decade.

“We are going to have to be nimble, ready to react,” Bullard said. “We will alter plans if necessary but we aren’t there yet, as I don’t want to make changes while we are still in the pandemic tunnel, as I want to avoid having COVID take an unexpected turn and then we have to go back into emergency mode.”

As long as market-based inflation expectations don’t “run away,” he said, he won’t worry. “But we have not seen that yet and I think we are in good shape now in terms of inflation.”

The economic expansion, which has surpassed projections, is the main driver of supply chain problems, he said. “This economy is not geared to grow at 6% to 8% for a whole year,” Bullard said. “Companies are producing at maximum capacity, the only way they could produce more is to build another plant and that would take years,” he said. “A lot of products, you have to wait in line and that is just the way it is now.

Bullard is not a voting member of the Federal Open Market Committee.

This Week’s Hidden Gems: (HDSN)(JBT)
Hong Kong services to rebound as China reopens, but UBP says sector is coming from ‘fragile situation’
How to Choose the Right Stock Broker for YOU and YOUR Trading Needs
Snag The Top Of A Towering 20th-Century Palace In Bilbao, Spain
Robots could surpass workers at Amazon by 2030, Cathie Wood says