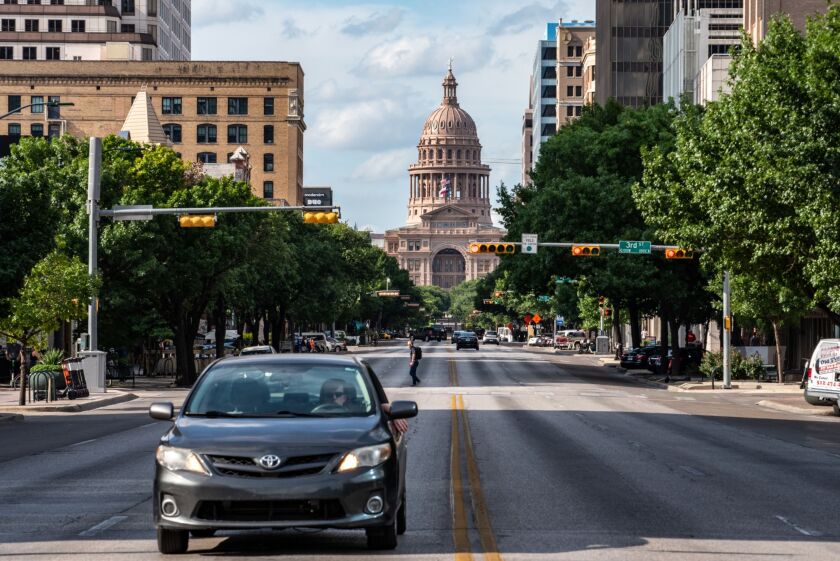 It would cost Texas little to pass a law barring banks that fail a pro-gun litmus test from underwriting bond deals in the Lone Star State, one of the measure’s sponsors claims.

The bill would require companies to certify that they do not have policies discriminating against firearm or ammunition businesses to be allowed to receive government contracts in Texas.

Targets include the bond underwriting businesses of BofA Securities and Citigroup, which in 2018 were barred by Louisiana from underwriting a state bond deal after they enacted policies viewed as anti-gun in the wake of the February 2018 gun massacre of 14 students and three adults at Marjory Stoneman Douglas High School in Parkland, Florida.

“So, when people ask me what the cost of freedom is I always say more than $50,000,” Capriglione said in a floor debate in which Senate Bill 19 cleared the House. The bill would take effect Sept. 1 if signed by Gov. Greg Abbott, as expected.

To qualify for any tax-supported business in the state, the underwriters would have to renounce their policies limiting lending to firearms companies, but they would not necessarily have to demonstrate that they had loaned money to a firearms merchant in Texas, Capriglione said.

Banks that would be affected by SB 19 would be Bank of America, Citigroup, JPMorgan Chase, Wells Fargo and U.S. Bancorp., along with Inuit, Square and PayPal, Capriglione said.

Citi’s policy asks new retail sector clients to adhere to “best practices” policies for firearms sales, including a minimum age of 21 for gun buyers and not selling bump stocks or high-capacity magazine.

BofA announced a month later that it would stop lending to companies that manufacture military-style rifles for civilians, saying that at least 150 of its employees had been affected by gun violence.

Wells Fargo last year said it was winding down its relationship with the National Rifle Association and said it would invest more than $10 million over three years to support nonpartisan research on gun violence prevention.

The bond industry in Texas is watching the legislation with uncertainty about how it would affect transactions.

“It probably depends on how many firms are affected,” said Drew Masterson, founder of Masterson Advisors in Houston. “There are over 40 firms pursuing underwriting of municipal bonds in Texas. If this affects just a handful of firms, it might not impact rates. Nobody yet knows how many firms would be affected.”

Texas issuers accounted for a record $59.5 billion of bond volume in 2020, and Citi was the top senior manager in the state for the third year in a row with more than $6 billion of deals. Bank of America Securities ranked fifth with $4.1 billion.

A corporation’s position on firearms would be added to the list of regulations to qualify for receiving any state or local tax dollars, Capriglione said.

A fiscal note for the bill cites “no fiscal implication to units of local government.”

The bill exempts tax and revenue anticipation notes if the state comptroller finds the prohibition is likely to “prevent an issuance, sale, or delivery sufficient to address the general revenue cash-flow shortfall forecast or the administration of matters related to the notes.”

The prohibition applies only to a contract between a state agency or political subdivision and a company with at least 10 full-time employees that has a value of at least $100,000, according to a legislative analysis.

“What this bill says is that if you are a company, primarily a lending institution, that is solely discriminating against a company based on its purpose in the firearms or ammunition industry that you won’t be able to receive taxpayer dollars,” Capriglione said.

“The point of this is to say that the Constitution really only has one good in it. And that’s in the Second Amendment, which specifically talks about the right of people to do this,” Capriglione said.

Under questioning from Rep. Abel Herrero, D-Robstown, Capriglione called out Citigroup, the state’s highest volume underwriter in recent years, as an example of the 12 companies that would be excluded from receiving fees from taxpayers.

“Citigroup has a policy discriminating against any business that sells firearms to anyone under the age of 21, even though it is legal today under federal and state law for those under 21 to be able to purchase long guns and shotguns,” Capriglione said.

Lobbyists for the major banks have failed to sidetrack the legislation, and smaller Texas-based banks have stood back, anticipating a larger share of the underwriting business with the major players gone.

“We have remained neutral on this bill throughout the process,” said Stephen Scurlock, head of the Independent Bankers Association of Texas. “I have stated that when I first read this bill and in its current form, it would appear that banks based in Texas may well see an uptick in opportunities in the public funds and public finance space.”

Rep. Rafael Anchia, D-Dallas, an attorney who works as bond counsel for Haynes & Boone, challenged Capriglione’s statement that the Second Amendment conferred an “absolute right” to own guns and that corporations had no First Amendment rights.

“So, you will be punished by not being able to do business with the state of Texas if you take a policy decision,” Anchia said. “You’re saying you can do business if you have this idea, you can’t do business if have that idea.”

Rep. Gene Wu, D-Houston, called SB 19 one of a long line of unconstitutional bills passed by the Texas Legislature, costing the state up to $1 million to defend in recent years.

Rep. Celia Israel, D-Austin, asked, “Are we here because after the El Paso and Odessa shootings, a lot of companies in corporate America stood up and said: ‘This is unacceptable’ And they took strong stances against the NRA?”

“No,” Capriglione replied. “And I don’t know why people keep talking about the First Amendment because certain businesses — and especially these businesses — they are not afforded those rights.”

Rep. Vikki Goodwin, D-Austin, failed to amend the bill to allow the underwriters and banks greater access to local issuers.

“My local officials have serious concerns that the provisions stipulating with whom they can bank will potentially void their depository contract and have a severe impact on city operations,” Goodwin said. “Specifically, the main concern is that the lack of this provision could impact bond issuances.”

The Texas law differs from the measures Louisiana took in that it affects a much larger volume of issuers. In the Louisiana case, the State Bond Commission voted to exclude the two banks from underwriting bonds for state infrastructure.

Texas’ Republican leaders have made access to guns a top priority in the state. Also moving through the Legislature is House Bill 1927 that would allow residents to carry pistols in public without a permit.

In launching the 2021 legislative session, Abbott said he wanted to make Texas a “Second Amendment sanctuary state” by keeping “any government office anywhere” from infringing on Texans’ gun rights.