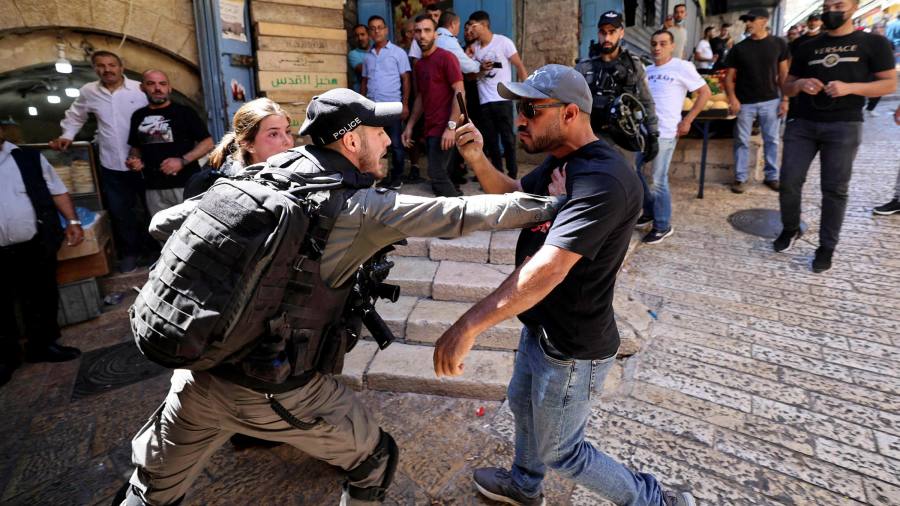 Yaacov Fauci, a Jew from New York, arrived with a police guard on a sunny autumn day in 2009, threw out the furniture and moved into the tiny annexe Kurd had built for his son.

A decade of court battles later, Kurd and his unwelcome house guest are in the final stages of a plan hatched long ago by rightwing Israeli settlers: pick out Palestinian homes in East Jerusalem, evict the owners using property laws that favour Jews over Arabs and, one house at a time, turn entire neighbourhoods Jewish.

With the Israeli Supreme Court due to decide last week if the settlers’ claim to the land was valid, the row over the evictions — which are illegal under international law because East Jerusalem is occupied territory — fused with already chaotic demonstrations at al-Aqsa mosque, a few minutes’ walk away in Jerusalem’s Old City. The mosque is in a compound in Jerusalem that is known to Jews as Temple Mount and which is sacred to both religions.

After days of scuffles with young Muslim men over police barriers at the Old City’s Damascus Gate, Israeli police stormed the compound, injuring hundreds of Palestinian protesters. On May 10 Palestinian militant group Hamas fired rockets deep inside Israel. In a warning to the Jewish state before its first volley, Hamas, which controls the Gaza Strip, demanded the immediate withdrawal of Israeli police from Sheikh Jarrah and the mosque.

Israel responded with air strikes on Gaza, which sparked unrest between Jews and Arab Israelis in mixed cities. It also triggered protests across the occupied West Bank. By Tuesday night, 217 Palestinians had been killed in the Gaza Strip, including 99 women and children, the Gaza ministry of health said.

For now, Israel has delayed the proceedings that would have made Kurd, his family and dozens of his Arab neighbours homeless. But the battle over this narrow lane of modest homes is the Palestinian-Israel conflict writ small, a symbol of the vast tracts of Palestinian land confiscated by the Jewish state over decades of occupation.

For rightwing Israelis, seeding Jewish neighbourhoods throughout East Jerusalem is a small part of the settlement enterprise that has seen 650,000 Jews move into the West Bank. Some 350,000 Palestinians live in East Jerusalem, encircled by about 200,000 Jewish settlers.

Palestinians want East Jerusalem to be the capital of a future state but Israel wants Jerusalem as its undivided capital. The bigger the Jewish population, the less likely it is to be uprooted in any future peace settlement, said Arieh King, a deputy mayor of Jerusalem and a leader in the settler movement.

“I want Jerusalem to be secured for ever as a Jewish city, and the only way to protect it from radical Muslims is by being more than them,” he said. “The heart of the Jewish nation is the Temple Mount — and the layers protecting the Mount will be the Jewish presence around it.”

Palestinians were first housed in Arab districts in East Jerusalem by Jordan, which controlled that part of the divided city for 19 years after the birth of Israel in 1948. Since the Six Day war in 1967, Israeli law allows Jews who lost their land in 1948 to claim it back through the courts. The law only applies to Jews.

“Today, this is the main organised way for the settlers to displace . . . Palestinians,” said Hagit Ofran, an expert on settlement activity at Peace Now, which advocates a two-state solution. “And it’s not a symbolic thing.”

Peace Now estimates that at least 200 families in Arab neighbourhoods in East Jerusalem are facing evictions under the same law used in Kurd’s case. Another 20,000 Arab-owned homes in East Jerusalem face demolition under other laws, including for zoning and building permit violations, according to Peace Now.

The battle over Kurd’s property maps the history of the Israeli-Palestinian conflict. Kurd and his family, refugees from Haifa in the north of Israel during the 1948 war, moved to this spot in 1956, he said.

The land was originally bought by a Jewish trust in the 1870s when the Ottomans ruled Palestine. After the 1967 war, the trust tried to reclaim it from the Kurd family, eventually selling it to settlers, who have pursued the case through the courts. In 2009, a judge handed the keys of the annexe to the settlers.

Last week, at the height of the tensions around the final eviction hearing, Kurd spotted a man taking rubbish out of his front garden and pointed to him. “There goes the thief,” he said.

There, with a bin bag in his hand, stood Fauci, red-faced from days in the sun and a bit sheepish after a video of him in his pyjamas in his neighbour’s garden, saying, “If I didn’t steal it [ the property], someone else will”, went viral two weeks ago. (“I am getting a lot of flak for that,” Fauci admitted.)

A religious student turned settler, Fauci has become the face of the dispute — he has been to the hospital twice, hit by rocks, but says he still enjoys living on the street. With the force of Israeli law behind him, he is sure he will one day have the rest of Kurd’s house.

“This is the entire story of this country — when people lose multiple wars, they don’t get to set the conditions of surrender. You lost the war, you pay the price,” he said. “All of this needs to be Jewish — we don’t believe in East Jerusalem and west Jerusalem. Jews have a mitzvah [religious commandment] to settle everywhere in the land of Israel.”