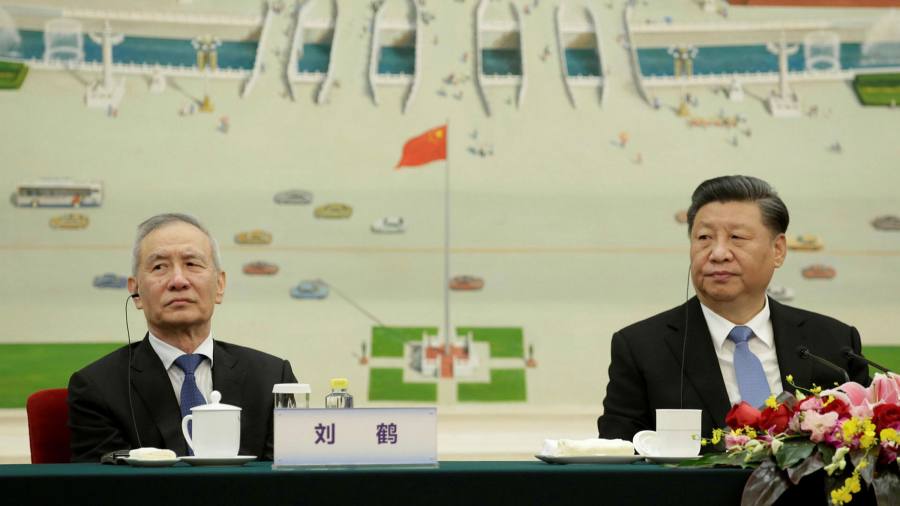 An investment firm founded by the son of China’s most powerful financial official has invested heavily in technology companies, including units of leading Chinese internet groups Tencent and JD.com.

Liu Tianran, son of vice-premier Liu He, was listed as chair of Tianyi Ziteng Asset Management, also known as Skycus Capital, when the firm was established in Zhejiang province in late 2016, according to corporate records seen by the Financial Times. Ten people, five of whom have worked with Liu Tianran, confirmed that he is Liu He’s son.

According to corporate filings, Liu Tianran relinquished the chair role at Skycus in April 2017, six months before his father was promoted to the Chinese Communist party’s 25-member politburo. He also transferred his shares in Skycus to another executive a year later, shortly after his father was appointed vice-premier with responsibility for the financial sector.

Liu He had previously been a low-profile figure who nonetheless wielded enormous influence as President Xi Jinping’s most trusted adviser on financial and economic matters. His elevation confirmed his place among the Chinese political elite.

Under Chinese government rules, children of senior officials are prohibited from managing companies in industries regulated by a parent, but can be employed by such firms in lower-level positions or advisory roles.

Several people close to Skycus’s operations told the FT that Liu Tianran, who also uses the English name Andy, continued to work on deals for the firm after stepping back as chair and transferring his shares. They added that he played a central role in lucrative transactions involving Tencent and JD.com units.

Since its inception five years ago, Skycus has grown rapidly, quickly establishing itself as an aggressive dealmaker and amassing more than Rmb10bn ($1.6bn) in assets under management, according to corporate records.

It has more than 30 employees working out of offices in Beijing and Shanghai, and public records capture a portion of the firm’s activity, showing that it has made at least a dozen investments in internet, healthcare and logistics start-ups in recent years.

The investment arms of Tencent, JD.com and China Development Bank, the country’s biggest policy lender, have also put money into one of Skycus’s largest funds, according to corporate records.

Many of Skycus’s most profitable investments are in companies associated with Tencent and JD.com. According to prospectus documents, in 2019 Skycus invested $40m in JD.com’s healthcare spin-off — a stake worth almost $230m today. Corporate records show it paid $70m in March 2018 for shares in JD.com’s logistics spin-off, which are expected to be worth at least twice that after the company completes an initial public offering on Hong Kong’s stock exchange later this month.

Skycus has also benefited from a $5m investment in Tencent Music in January 2018, according to a US securities filing. The stake is estimated to be worth almost double that today.

The “princeling” sons and daughters of top Chinese leaders have generally sought to maintain low profiles. But they continue to be drawn to the finance industry. “Princelings have to be extraordinarily cautious about everything they do because it’s easy for them to attract attention,” said one industry executive. “But they are not going to go away.”

Christopher Johnson, a former top CIA China analyst, said princelings were still an influential group within the country despite growing pressure from Xi, whose father was a senior party and government official under Mao Zedong.

“Like many others in the party elite, the princelings thought Xi Jinping would be ‘their guy’ as he is one of their own,” said Johnson, who is chief executive of China Strategies Group, a consultancy.

“Instead, he has diminished the scope of their influence — especially those from the top elite families — but they remain an important constituency within the system that Xi must manage carefully.”

Liu Tianran’s career has had an unusual trajectory. Before entering the finance industry, he was a journalist at the Economic Observer, a Chinese business newspaper. He edited its lifestyle section and wrote articles about football and economics.

He later joined the marketing department of CCB International, an investment arm of one of the country’s “big four” state banks. He then moved to a Shanghai government-backed investment fund before starting Skycus in 2016.

A person named Tang Meng replaced Liu Tianran as chair of Skycus when he stepped down from the role in 2017. According to the Asset Management Association of China, Tang entered the finance industry just six months earlier, after 17 years’ service with the Beijing municipal government’s state security office and the People’s Liberation Army.

In May 2018, two months after his father became a vice-premier of China, Liu Tianran’s name was removed from Skycus business filings entirely. Two companies under his control transferred their shares in Skycus to companies held by Tang and others.

After his promotion to vice-premier, Liu He’s portfolio was expanded to include trade negotiations with the US and the EU. He also heads the Chinese government’s powerful financial stability and development committee, a coordinating body that oversees the central bank as well as China’s banking and securities regulators.

This role has made him one of the principal officials overseeing Xi’s crackdown on Ant Group, Jack Ma’s financial technology company, and his ecommerce group, Alibaba. The clampdown has hit Ma’s companies hardest but has also been broadened to target other internet platforms, including Alibaba rival JD.com and at least one unit of Tencent, Ant’s largest online payments competitor.

In November, regulators blocked Ant’s planned $37bn IPO in Shanghai and Hong Kong. If it had proceeded, Ant would have been valued at more than $300bn, bigger than even the largest banks in China and the US.

The State Council Information Office, Liu He’s office and Skycus did not respond to requests for comment. Liu Tianran could not be reached for comment.