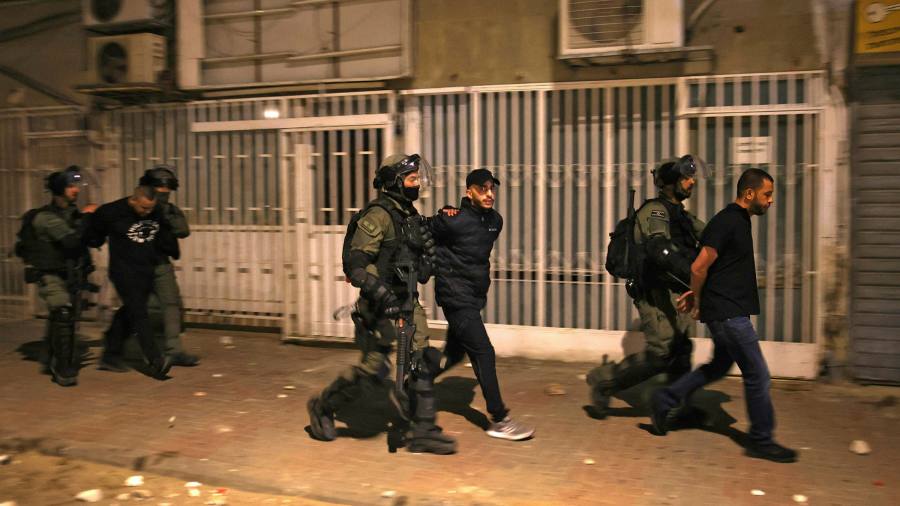 Israeli security forces struggled to quell worsening communal violence in its cities as it stepped up operations in Gaza against Palestinian militant group Hamas.

Jews and minority Israeli Arabs fought each other in several Israeli towns overnight as Prime Minister Benjamin Netanyahu vowed to quell the rioting with “a lot of force” and warned the violence could get worse.

The worst domestic unrest in years escalated with a soldier beaten in Jaffa, a police officer shot in Lod and another synagogue set on fire, according to Israeli media. Outbreaks of mob violence were reported around the country as large groups of Arab and Jewish men defied curfews.

The clashes between Israeli citizens came as the Israeli military added tanks and artillery to a five-day air campaign against Hamas, which has killed 119 Palestinians, including 38 women and children, according to health officials in Gaza.

The Palestinian militant group continued to fire rockets into Israel, directing hundreds more at Tel Aviv, Ashdod and one as far south as the Red Sea, where the Jewish State had rerouted international flights. Hamas has fired more than 1,500 rockets into Israel since Monday. Seven Israelis, including a soldier and a child, have been killed.

“We are dealing with a campaign on two fronts — in Gaza [and] in Israel’s cities,” Netanyahu said late on Thursday, after several thousand police were moved from the occupied West Bank to Israeli cities.

The Arab-Israeli conflict has for more than a decade been dominated by fighting between Israeli forces and Palestinian factions in the occupied territories, but the communal violence inside Israel has added a dangerous new dynamic.

Israeli Arabs account for about one-fifth of the Jewish state’s population, carry Israeli passports and vote in the country’s elections. But they say they suffer from institutional and social discrimination and their sympathy for the Palestinian cause has made them a target for rightwing Israeli politicians.

Price analysis 2/3: BTC, ETH, BNB, XRP, ADA, DOGE, MATIC, DOT, LTC, AVAX
Stocks making the biggest moves midday: Carvana, Colgate-Palmolive, Tesla and more
Gilead’s Stock is on Sale: Should You Buy?
Rumor has it that Dogecoin could shift to proof-of-stake — What does that mean for miners?
Top Stock Picks for the Week of June 17, 2019