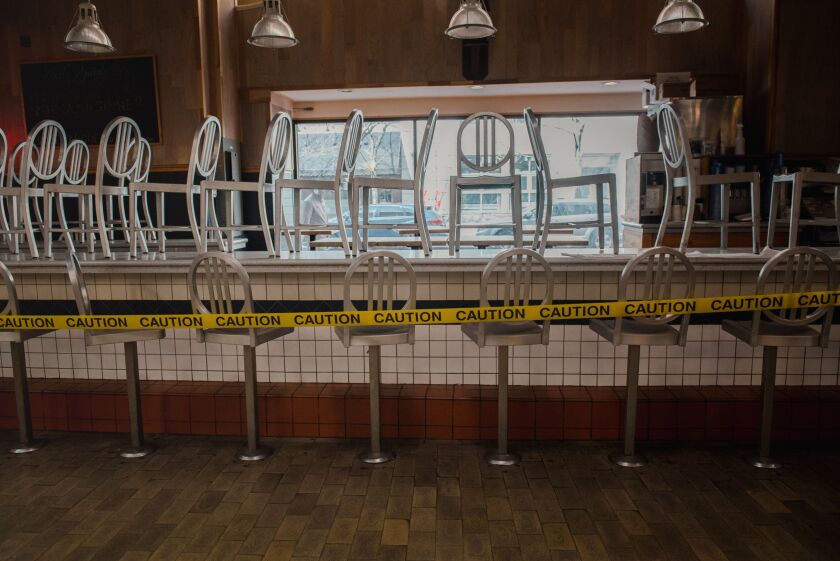 The fracas between governors and legislatures over executive powers during the COVID-19 pandemic is reaching a new level in Pennsylvania — two proposed constitutional amendments.

Keystone State voters on Tuesday will decide on two ballot measures that would limit the governor’s emergency disaster declaration powers and enable the state legislature to end a declaration with a two-thirds supermajority vote.

This unusual move, part of a national discussion over leadership balance, reflects the sharp political divide in Pennsylvania, where Democratic Gov. Tom Wolf has frequently been at odds with a Republican-dominated legislature.

“There is a party distinction there, to put it mildly,” said Terry Madonna, a pollster and senior fellow in residence for political affairs at Millersville University.

The tussle between the executive and legislative branches over COVID-19 emergency powers has rippled through several states.

The subject, long of interest to government watchdogs, has mushroomed as legislatures begin to flex their muscles deep into the pandemic.

In New York, good-government organization Reinvent Albany favors amending the state constitution to give the legislature more equal powers to the governor in the budget process.

“We believe New York State’s budget process has swung too far in favor of the executive and has become a vehicle for delivering the governor’s biggest and most controversial non-budgetary policy priorities,” Reinvent Albany said in a memo of support.

Earlier this month, Oregon’s House of Representatives narrowly defeated a move to consider a bill that would give lawmakers oversight of Gov. Kate Brown’s emergency powers.

Idaho Gov. Brad Little, meanwhile, signed a package of bills limiting his own crisis-related authority. The bills, he said, do not curb a governor’s ability to protect residents.

“Although governors need to be able to respond to emergencies quickly, legislatures have an important role in making sure these powers are not abused and that they do not undermine the separation of powers vital to our democratic system of government,” said the National Conference on State Legislatures.

Pennsylvania’s referendum is essentially one on Wolf’s management of the COVID-19 crisis.

Wolf on March 6, 2020, issued a disaster declaration, citing the state constitution and the Emergency Management Services code. He has repeatedly extended his 90-day orders. Wolf’s stay-at-home measures included the closing of schools and businesses, including state-run liquor stores.

His proclamation activated many emergency resources, such as transferring funds to the Pennsylvania Emergency Management Agency and suspending provisions of regulatory statutes relating to the operation of businesses, health, education, and transportation.

Shortly after Wolf in early June of that year extended the order for 90 days, the state Senate and House of Representatives adopted a concurrent resolution calling on Wolf to terminate the declaration.

On July 1, 2020, the state Supreme Court ruled in favor of Wolf. Ruling narrowly, the court said the governor would have to sign off on the legislature’s resolution. Wolf vetoed the measure.

“We express no opinion as to whether the governor’s response to the COVID-19 pandemic constitutes wise or sound policy,” Justice David Wecht wrote.

“Similarly, we do not opine as to whether the General Assembly, in seeking to limit or terminate the governor’s exercise of emergency authority, presents a superior approach for advancing the welfare of our commonwealth’s residents.”

“I simply cannot envision that the framers of the Pennsylvania constitution contemplated that the governor could be invested with a panoply of exceptional powers — including the delegated power to suspend laws and commandeer private property — but that the legislature nonetheless would be powerless to implement a counterbalance that was not then subject to the chief executive’s own veto power,” he wrote.

Wolf, whose $37.8 billion budget for fiscal 2022 is before lawmakers, has undertaken a media campaign in which he is hinging his emergency powers to healthcare services.

“I’m not sure you want to hamstring any governor of whatever party by doing that,” he told Madonna on a Pennsylvania Newsmakers show.

“What you’re saying in this is to take a governor’s ability to make decisions in the midst of a crisis … a pandemic, but also a terrorist attack, a big snowstorm, a hurricane, whatever disaster you could imagine,” Wolf said.

“In any democracy you need some way of reacting fast.”

Rep. Malcolm Kenyatta, D-Philadelphia, voted against the disaster declaration amendments “so my constituents get swift help when they need it most.”

He added: “When disasters happen, the last thing we need is for politicians to hold up relief in hopes of a viral Twitter moment.”

For municipal bond analyst Joseph Krist, the question becomes how much of an impediment approval would create for fiscal matters.

“If I thought that the proposals to limit the governor’s powers were based in anything other than pure partisanship, it wouldn’t be so troublesome,” he said. “The Republicans have wanted this fight for a while.”

One of the ballot measures would limit the length of a governor’s emergency declaration to 21 days as opposed to the current 90. A second would require a majority vote in the legislature to extend the declaration beyond the three weeks.

David Fiorenza, a professor at Villanova School of Business, said excessive power in the hands of one person poses a danger.

Michael Torres, media director for the right-leaning Commonwealth Foundation, said Wolf’s restrictions have not led to fewer deaths, either as a proportion of the state’s population or in total, compared with other states.

“Last summer, Wolf blasted the governors of Florida and Texas for being less restrictive, yet Pennsylvania has far more deaths per capita than either Florida or Texas – about 26% more than Florida and 17% more than Texas,” Torres said.

He added that new case counts in Pennsylvania, along with neighboring New York and New Jersey, have exceeded those of Florida and Texas, even while maintaining tougher restrictions.

As of Friday, Pennsylvania’s per-capita death toll from the coronavirus, according to Becker’s Hospital Review, put it 11th out of the 50 states — while blue-state neighbors New York and New Jersey have fared the worst, red states including Mississippi and Arizona are also among those with more lost lives per capita than the Keystone State.

Another proposed constitutional amendment in Pennsylvania would prohibit discrimination based on race or gender.

Also on the ballot and not requiring constitutional change is a measure to enable municipal fire districts to borrow through an existing state loan program. This parallels what many comparable districts can do in other states.