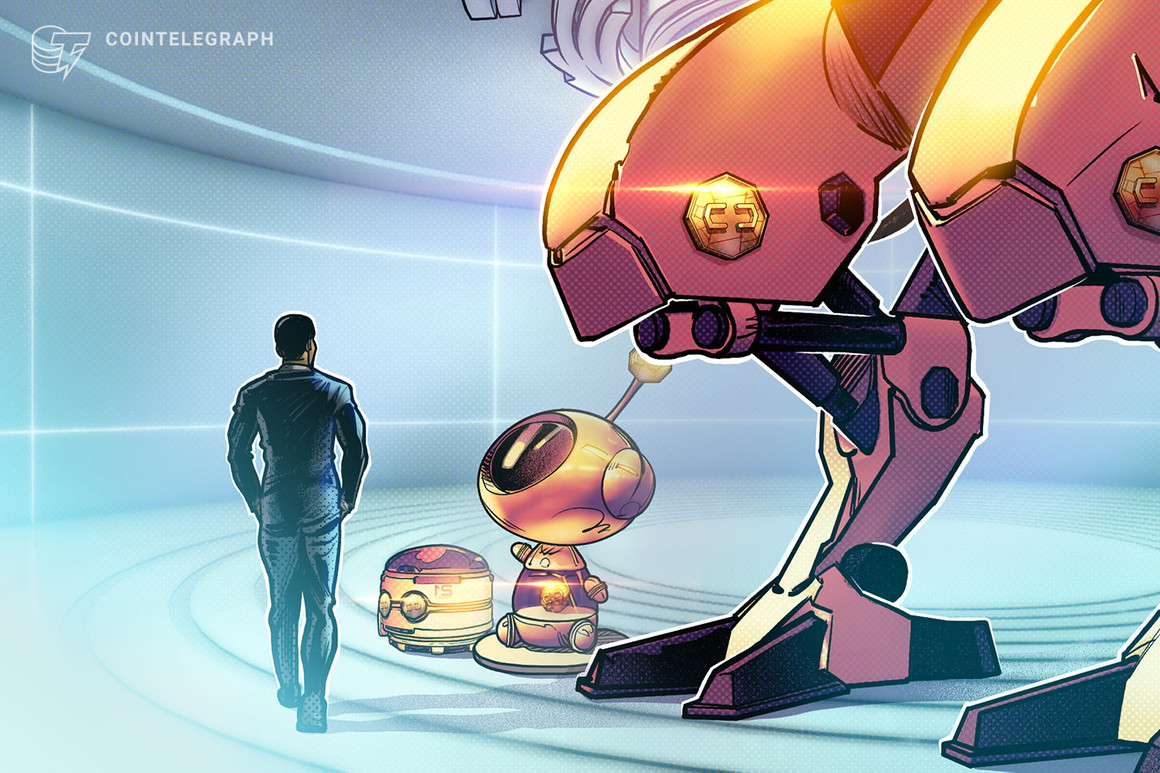 The supremacy of CEXs can be clearly observed in the size and popularity of trading platforms like Binance and Coinbase, which are now so recognizable and mainstream that Coinbase has recently become the first crypto company to be listed on the Nasdaq stock exchange.

Acting as a necessary bridge between fiat and crypto, centralized exchanges provide unparalleled convenience. Nevertheless, industry leaders often see these types of exchanges as one of crypto’s single points of failure. Sergej Kunz, co-founder of 1inch Network — a DeFi platform offering automated market makers and other related services — believes that AMMs will be the main competition for centralized exchanges. He told Cointelegraph:

“In the next four to five years, the DeFi industry will grow a lot. We will eliminate intermediaries, such as banks, and replace them with DeFi. In the upcoming years, 1inch is going to be ready to compete with centralized exchanges for users who swap assets a few times a day.”

Another factor fueling the interest in DEXs is the security concerns. Although malicious attacks on exchanges have become less frequent, exchanges have repeatedly proven that they are vulnerable to hacks and information leaks.

More decentralized alternatives aim to provide an answer for those concerns, and one way to do it is through the use of the automated market maker on exchanges.

The history of AMMs: From zero to hero

AMMs are the latest prominent breed of DEX protocols. They do not rely on order books like regular exchanges but instead use mathematical formulas to calculate the price of assets.

AMMs also provide liquidity from different pools, excluding the need to have another user on the other side willing to trade. Trading is done by interacting with smart contracts or peer-to-contracts, which provide the price and liquidity necessary to execute trades.

The new AMM-based DEXs greatly facilitate exchanges between crypto assets and have surged in popularity ever since the DeFi summer of 2020. The concept was first introduced by Bancor back in 2017. Vijay Garg, chief marketing officer of MakiSwap — a cross-chain AMM — explained how AMMs are revolutionizing the world of trading, telling Cointelegraph:

“AMM is going to drive the entire financial ecosystem, as they work independently without holding private keys of users and lie under less regulatory framework. Moreover, with enough liquidity, it’s faster, easy, convenient and cheap for users to trade. AMMs fundamentally alter how users swap cryptocurrencies.”

Hailed as the first true decentralized AMM, Ethereum-based Uniswap launched in late 2018 and, within several years, took the crypto world by storm due to its simple user interface and broad listing system. Right now, Uniswap is holding on to the top spot as the world’s leading DEX in terms of trading volume.

Uniswap spurred multiple “spinoffs,” one of which was SushiSwap, an AMM that launched a vampire attack and ultimately solidified itself as Uniswap’s main rival. Although SushiSwap was the first to use this method, it has since become a common practice, as protocols constantly try to leech liquidity from one another in “AMM wars.”

AMM protocols make up almost all of the total volume on DEXs and are considered an instrumental tool for the DeFi ecosystem. However, with innovation, there are always new problems and challenges that arise.

As such, new types of AMMs have now started to bloom and have been diversifying the space, where different exchanges cater to different user needs. Alex Lee, a developer at ZKSwap — a privacy-centric AMM — told Cointelegraph:

“DeFi and traditional finance aren’t much different, but DeFi requires lesser trust. AMMs, in particular, brought changes to the current financial landscape, and this can be observed in its growth.”

The different types of AMMs

Each AMM tends to have its own unique price algorithms to harness liquidity in various ways and from different sources. In the current DeFi landscape, the three most dominant and distinct AMM protocols are Uniswap, Curve and 1inch.

As the second-largest DEX in the world, Curve inherited the core design of Uniswap but specializes as the first AMM optimized for stable asset pools. As a result of its architecture, Curve minimizes the risk of impermanent losses, solves the problem of limited liquidity, and offers one of the lowest trading rates across all DEXs.

Another popular trend in the world of AMMs is aggregation. The 1inch Network has pioneered this technique to have a dominant market share in the area. This method seeks to allow its users to save on fees when making large trades on low-liquidity pools, avoiding high slippage by routering the transaction through multiple liquidity pools. Kunz told Cointelegraph: “Through our Pathfinder algorithm, deals are split across multiple DEX pools, ensuring users will be able to find the best swap rates.”

One of the downsides inherent to the current AMMs is impermanent loss. Whenever liquidity pool tokens fluctuate in value, an arbitrage opportunity is created that will incur losses to the pool. The larger the fluctuation, the worse the losses will be. Therefore, AMMs work better if token pairs have similar values.

Although Curve minimizes this risk, the new version of Bancor seeks to prevent the problem completely. Allowing the creation of AMMs with pegged liquidity, Bancor v2.1 was designed to mitigate slippage and help solve the issue of impermanent losses. Nate Hindman, head of growth at Bancor Protocol, told Cointelegraph:

“The Bancor protocol uses its elastic supply token, BNT, to co-invest in its pools and earn fees that the protocol uses to compensate for IL when an LP eventually withdraws their stake. An LP must be in a pool for 100 days or more to receive full protection from IL. This means that even if a token moons in price, an LP is entitled to withdraw the full value of their tokens as if they held them in their wallet.”

There are other disadvantages to trading with AMMs. On Ethereum, high gas fees have become an issue for the typical retail trader. Still, many exchanges have started to adopt layer-one and layer-two solutions to accommodate traders looking for smaller-size swaps. As Kunz stated: “The scaling of blockchain is a missing piece for further growth of the DeFi sector, but we already see some layer-two solutions by Optimism and Matter Labs, which are hopefully going to solve this in the coming months of 2021.”

Limited liquidity in some assets can also cause issues. Still, perhaps one of the most significant problems in the world of AMM trading is front-running bots that can take advantage of trades made by unwary buyers/sellers, creating faster transactions to profit from these traders.

Aleksandras Gaška, CEO of Blank Wallet — a privacy and user-centric wallet — told Cointelegraph that this issue is affecting the common AMM user. “Although tech-savvy investors can decrease their slippage or follow a DCA strategy to avoid front-running bots by buying in a few, smaller transactions, the only foolproof strategy is to allow users to use silent transactions.”

Privacy has always been a central topic in the cryptocurrency world. For example, Bitcoin and Ethereum are pseudonymous; they are also public in their nature. All transactions and addresses are exposed on the blockchain and can be viewed by anyone.

This level of transparency creates a danger for users sharing their public addresses. As such, privacy in the world of decentralized finance is becoming a highly demanded commodity. Speaking about this need, Lee told Cointelegraph:

“Market-level information should be transparent to all participants while still preserving individual privacy. And privacy is the basic right of an individual. It’s critical to keep in mind that any decentralized financial system worth having must respect the financial ownership of the individuals it serves.”

The Future of AMMs

On May 6, Uniswap released its long-anticipated v3 update. Aiming to maximize capital efficiency, the upgrade was a success and, in just one day, recorded more than twice the volume that v2 saw in its first month. Despite the achievement, many users are calling the launch a flop due to the complex user interface and soaring gas fees, which are even higher than v2’s.

While most of the DeFi ecosystem resides on the Ethereum blockchain, there is a mass migration of projects, like 1inch Network joining Binance Smart Chain and other rival DApp blockchains. Uniswap and other ERC-20-based protocols might be reliant on the success of Eth2, but the future looks to be in interoperability.

It’s tempting to assume AMMs protocols will be responsible for all on-chain liquidity in the future. However, DeFi is still a maturing technology, and its innovation is fast-paced. Even if AMMs can resolve their limitations, regulatory frameworks and new technologies might present threats to their dominance.

Bitcoin eyes $25K as BTC price nears best weekly close in 5 months
Top Stock Picks for the Week of June 17, 2019
US economy beats expectations with 2.9% growth
Rumor has it that Dogecoin could shift to proof-of-stake — What does that mean for miners?
Mega-mergers stand out amid a 2022 dip in hospital consolidation