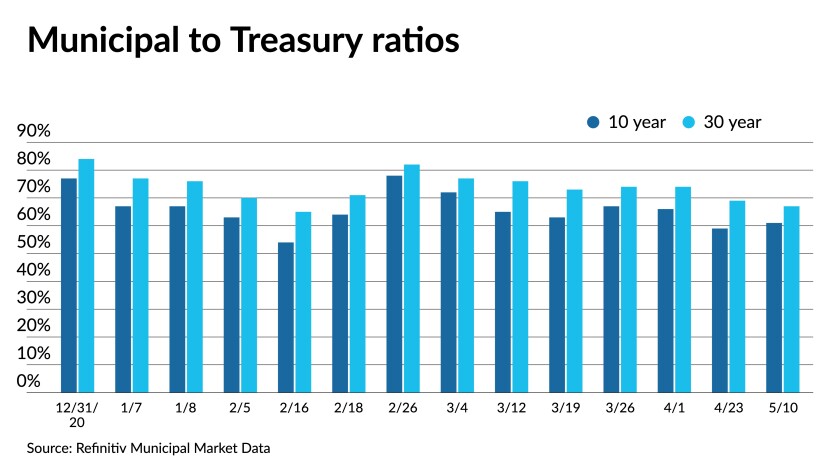 Municipals were little changed on a sparsely traded Monday as U.S. Treasuries showed some weakness but participants await the week’s diverse primary, which should keep rates steady as reinvestment needs tick up.

The new-issue market continues to show strong and welcoming reception as supply remains manageable and reinvestment needs are about to intensify for a while, according to Jeff Lipton, managing director of credit research at Oppenheimer Inc.

“The surprise headline print fits into our narrative of a delicate and uneven recovery and prompted slight bumps in the MMD throughout most of the curve,” Lipton said Friday, noting that spreads continue to grind tighter, making it challenging to locate value.

“We are seeing a tale of two retail buyers,” Lipton said, “one that is searching for value and is tough to commit, and one that is consistently looking for tax-efficiency and high credit quality and is an easier sell.”

Going forward, tighter spreads and richer ratios can come about, particularly as looming tax increases amplify the value of tax-exemption, he noted, adding “although we have to question just how much lower ratios can go.”

Triple-A benchmarks were steady across the curve while municipal to UST ratios closed at 63% in 10 years and 70% in 30 years on Monday, according to Refinitiv MMD, while ICE Data Services had the 10-year at 62% and the 30 at 71%.

Looking to this week, $6.5 billion of total muni issuance is expected to arrive, just above the $6.23 billion weekly average of tax-exempt issuance.

These deals and others should generate solid demand this week as the technical condition of the market remains tilted to the positive side, according to Michael Pietronico, chief executive officer at Miller Tabak Asset Management.

“The historical linkage between commodity prices and inflation is mixed: sometimes, but not always, a surge in commodity prices has been the precursor of higher inflation,” said Mickey Levy, Berenberg chief economist for the U.S., Americas and Asia.

Many economists do not believe inflation will see a time like in the 1970s, although it is “too early” to tell if it will be transitory.

“The increase [in commodity prices] confirms what has been largely known and telegraphed by the Fed: The re-opening of the global economy in an environment where supply is constrained should, and has, resulted in higher goods prices,” says Gary Pzegeo, head of fixed income at CIBC Private Wealth, U.S.

“The confluence of real and monetary factors has been powerful,” he added. “The Fed’s objective of generating higher inflation and signaling that it will keep its policy rate zero has lifted inflationary expectations. Expectations of higher future prices have led producers to lock in future supplies.”

Also, persistent wage increases despite slack in the labor market could “pose a challenge to the Fed. “The Fed has long adhered to the Phillips curve that posits an inverse correlation between wages and the unemployment rate,” Levy said. “But based on the lessening response of wages to declining unemployment in the last decade, the Fed’s new strategy is based on a flat Phillips curve and the perception that wage gains can remain stable at full employment. An acceleration in wages could force the Fed to shift its perception once again.”

Later this year, Levy estimated, economists should have a better grasp on whether inflation will be transitory.

It may be longer than that, according to Jeff Klingelhofer, co-head of investments and portfolio manager at Thornburg Investment Management. “I still believe we are a year away from a dial up of non-transitory inflation, but there’s a solid chance we see this translate into realized inflation via wages,” he said.

While commodity and wage inflation, which consumers will notice, could run high, “wage inflation will likely remain tepid and that will concern the Fed under their new mandate.”

And while the Fed is closely watching the labor market, “[Friday’s] employment report shouldn’t result in any change of policy or messaging by the Federal Reserve,” Pzegeo said, “as it is just one month of data with seasonal distortions due to the timing of last year’s shutdown.”

The Fed, he added, will be on hold until reaching full employment, “which could be several million jobs away,” he said. “Markets have been walking back their projections for Fed tightening since the FOMC met on April 28 and last week’s release supported that trend.”

Economic indicators
The Conference Board Employment Trends Index “increased significantly” in April to 105.44 from an upwardly revised 102.65 in March, first reported as 102.44. The index is 45.7% higher than a year ago.

The gain suggests “strong employment growth in the coming months,” said Gad Levanon, head of The Conference Board Labor Markets Institute. While most components have shown strong growth, “the number of employees in the temporary help industry, usually a strong leading indicator of employment, declined in April. Rather than signaling a weak outlook for job growth, it may reflect some substitution in employment as employers hire more regular employees and end contracts with temporary workers.”

Separately, inflation expectations for a one-year period rose to 3.4% in April, its highest read since September 2013, the Federal Reserve Bank of New York’s Survey of Consumer Expectations showed.

In March 3.2% inflation was expected in a year. For a three-year term, expectations held at 3.1%.

Respondents see earnings growing 2.1% in the next year, up from the 2.0% projection last month, but down from the 2.6% posted in February 2020, before the pandemic.

And while more respondents see unemployment rising in the next year (34.6% compared with 34.4% last month), the figure is lower than the 12-month average of 38.7%.

Op-ed: Salesforce appoints ValueAct’s Morfit to its board and a proxy fight may loom ahead
Trading Option Calendars: Short vs Longer Term Duration Calendars Ep 217
Rumor has it that Dogecoin could shift to proof-of-stake — What does that mean for miners?
5 Perfect Earnings Charts
Yellen says raising debt limit is only solution to avoid fiscal crisis