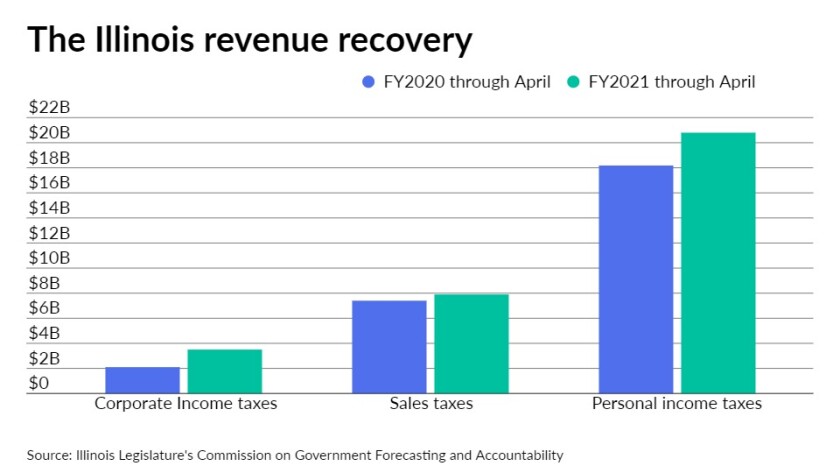 With the clock ticking on the deadline to pass a state budget, Illinois Gov. J.B. Pritzker removed one contentious issue from the table by agreeing to fund a scheduled $350 million increase in school aid.

In fiscal 2021, Pritzker had bypassed the scheduled $350 million annual increase required under the evidence-based formula adopted in 2017 and bypassed it again in his fiscal 2022 budget proposal as the COVID-19 pandemic loomed over the state’s already strained finances.

Thanks to better-than-expected tax collections, he’s now recommending lawmakers include the increase.

The administration in February didn’t incorporate any new federal relief into the 2022 proposal, which held most spending to 2021 levels. At the same time, schools in February knew they would be receiving fresh aid totaling $2.25 billion from December’s federal coronavirus relief package.

“Back in February when faced with financial uncertainty to the state and the prospect of billions of federal dollars going directly to our schools….I presented a flat operational budget for the state which was all we could afford,” Pritzker said late last week during a pandemic update. “Our state revenues are outpacing the estimates and the expectations that experts gave us earlier this year.”

The state’s districts are also slated to receive $5.05 billion from the American Rescue Plan President Biden signed in March while Illinois will receive $7.5 billion.

Restoration of the school aid removes one barrier to Democratic support in the General Assembly as budget negotiations heat up. Pritzker is a Democrat and enjoys Democratic super-majorities but some had pushed back over the education funding.

The administration has described the elimination of the tax breaks as the best means to move toward structural balance without raising general taxes.

“I remain committed to finding long term sustainable solutions that don’t put the burden on working families who can least afford it,” Pritzker said, calling the breaks “corporate welfare.”

In addresses to business leaders last week, Illinois House Speaker Emanuel “Chris” Welch and Senate President Don Harmon indicated eliminating all of the breaks was not a done deal. Welch said he supports some but not all of tax break cuts and worries over damaging business in their post-pandemic recovery. Harmon said he wants business leaders to lay out how they benefit from the breaks.

Pritzker has tried to get mayors on board because they stand to get $228 million if the breaks are eliminated which would make up for a 10%, or $150 million, cut Pritzker has proposed in the amount of income taxes shared with local governments. Mayors haven’t bitten and are pushing instead to get the full allotment.

Base general fund revenue receipts were up $1.78 billion for April and $4.92 billion for the first 10 months of the fiscal year, a 15% increase year-to-date, according to the monthly report from the legislature’s Commission on Government Forecasting and Accountability. Fiscal 2020 revenues had taken a $2.75 billion pandemic blow.

Corporate tax collections were up $614 million for April and personal income taxes grew by $533 million. Net income taxes are up $3.4 billion for the year, but $1.3 billion is due to the 2020 tax filing delay. The state followed the federal government in moving the filing deadline to July from April last year. This year, the state, like the federal government, delayed the deadline one month, to May, and only for personal income taxes.

“While uncertainty is less heading into upcoming FY 2022 than last year, it still is much higher than normal. The unwinding of the various stimulus programs such as direct stimulus payments, augmented unemployment benefits, rental assistance and other business and consumer focused benefits, will likely create some headwinds related to growth rates,” COGFA Revenue Manager Jim Muschinske wrote.

Sales taxes rose at a clip of $297 million for April after taking a deep hit in 2020 and overall for the year are up $557 million.

The state’s improving revenue picture and looming federal cash prompted Moody’s Investors Service and S&P Global Ratings in March to revise the state’s outlook to stable from negative on its general obligation ratings that remain at the lowest level of investment grade.