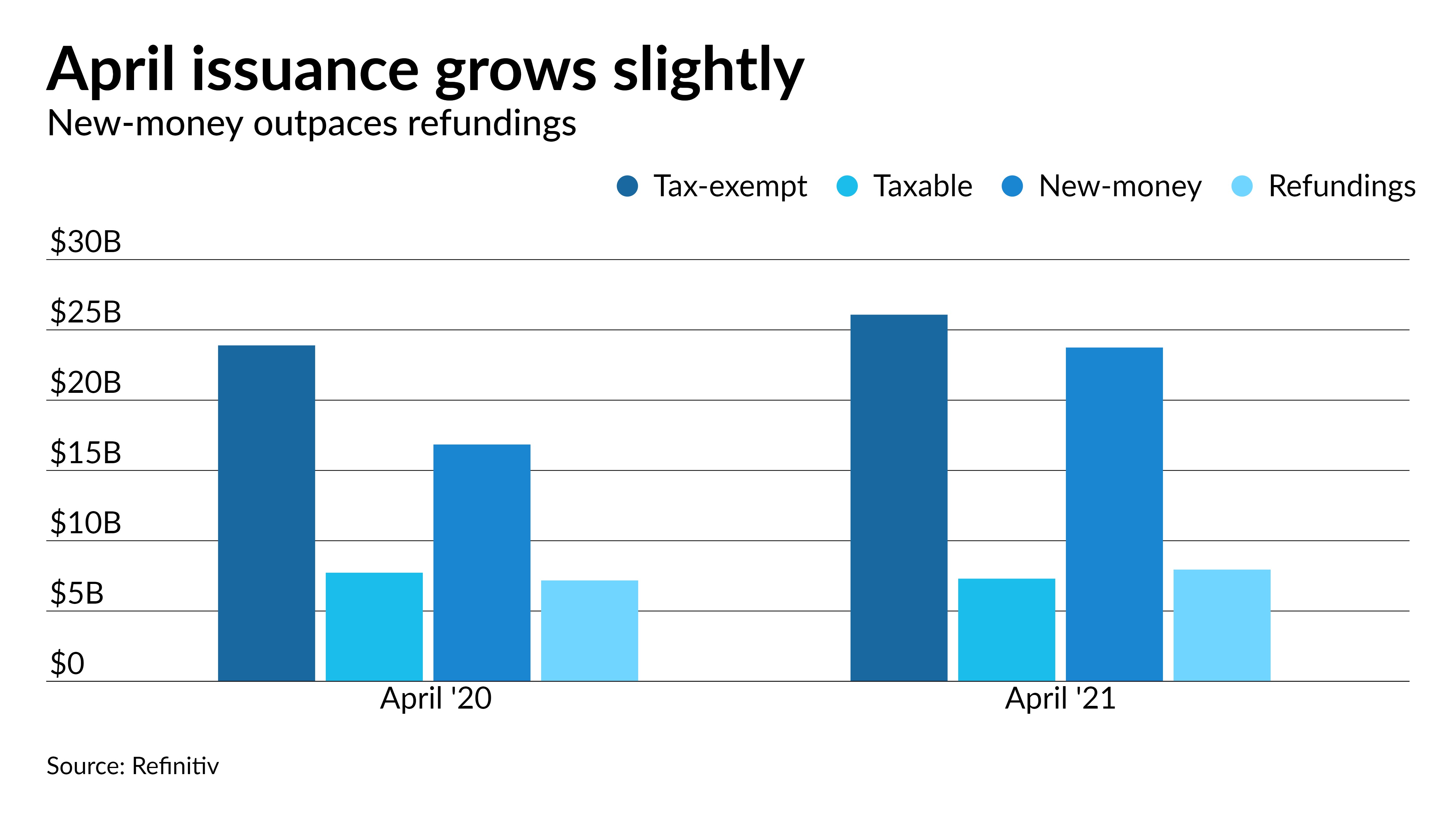 Municipal issuance increased 6.2% in April year-over-year, starting the second quarter with $33.65 billion across 940 transactions, up from the $31.69 billion in 919 deals in April of 2020, according to data from Refinitv.

“I would absolutely not be surprised if we break last year’s record in 2021,” said Tom Kozlik, director of municipal credit and strategy at Hilltop Securities. “We very well might be to a place where we are just trying to figure out how much higher than last year we will be, and we are close to that point, actually.”

The $350 billion of direct federal aid being divvied out among state and local governments is going to impact issuance for the rest of the year, “mostly to the upside,” Kozlik said.

“If there were issuers who were on the fence because of fiscal concerns, those concerns were likely minimized in the near-term because of the Rescue Act relief,” Kozlik said. “There could be even more issuance upside if something on infrastructure occurs.”

If a meaningful infrastructure package with municipal-bond friendly elements gets done at the federal level, “then issuance will easily break the record and then some,” he added.

Part of the new-money spike had to do with the certainty stimulus and direct aid to issuers provided. And while refundings fell, Kozlik noted that

they are primarily interest rate driven “so it is sensitive week to week, not just month-to-month.”

“The slight decrease is most likely because there were fewer taxable refundings year-over-year,” Kozlik said.

California was the largest state issuer thus far in 2021. All issuers in the Golden State have totaled $27.36 billion. New York came in second with $16.71 billion, Texas in third with $14.76 billion, Pennsylvania next with $5.21 billion and Florida followed, rounding out the top five with $5.18 billion.

Sectors hit hard by the pandemic have begun to reemerge as heavier issuers.

The transportation sector surged for the month to $6.77 billion from $1.05 billion in 2020. Moody’s Investors Service just this week moved mass transit into the stable category from negative.

“I think that near-term issuance trends in this sector could be very strong,” Kozlik said. “If there is infrastructure-specific legislation that comes out of D.C. this sector could see a considerable amount of activity. Depends upon the specifics.”

Bill Black, senior portfolio manager at City National Rochdale, such much of the recovery in many sectors seems to be “already priced in,” such as airports.

“I think investors are getting more comfortable with higher education and dorms, as students get immunized,”he added.

Colleges and Universities issuance dropped 46.8% and healthcare issuance fell 57% in April, but part of that is due to issuers in those sectors moving to corporate CUSIP issuance, finding a more diverse investor pool there.

The last year and a half has seen a dramatic increase in corporate CUSIP deals in the healthcare, non-profit and higher education sectors with the structure offering those sectors — all hard hit by the COVID-19 pandemic — more flexibility to manage debt.

However, Black said there are some areas that remain less certain and are still relatively cheap for those investors looking for yield.

“Senior living is one — will people still be interested in moving into congregate care? Will options that have evolved for staying at home reduce demand in the future?”

And another area is commercial tax-increment financings and other development districts.

“Are people going to resume shopping at the same rate as in the past, or will sales and property tax assumptions for existing financings prove too aggressive? Similarly, are assumptions about the rate of buildout and valuations for office developments going to hold up?” Black said those are questions that remain to be seen.

High-yield paper has been harder to come by as the credit picture improves.

“Our flows have been positive, but manageable, allowing us to continue to be selective in our HYM investing without cash getting excessive,” Black said. “Nevertheless, it remains a challenge, as other options for finding yield are investing in more speculative deals, going into riskier structures such as subordinate bonds on speculative financings, and taking on rate risk through [tender-option bonds] or lower coupons.”

He added there are some select areas, where high-yield supply might come from down the road.

“Affordable housing financings, which have been coming recently in good size with relatively good yield is one area,” according to Black. “Then there’s ‘green’ type financings — waste to fuel projects, for example. As bigger corporations get involved both on the waste supply and product demand side, these may become more successful.”

Black said that public-private partnerships may also grow as governments will likely need to leverage federal funding through debt and partnerships.

With an improving credit picture, yield-y paper is even more in demand and harder to come by, but the demand is there, Black said.

The “demand side remains very strong, with search for yield, a strong economy helping credit and the possibility of rising tax rates all factors,” said

The supply side has not kept up, he said. “We don’t see this changing through summer, at least. Credit spreads should remain tight.”

He added that flows “seem to be one of very few places” investors are finding yield right now.

“What might change flows is a sustained rise in U.S. Treasury yields, along with credit concerns being raised about the municipal bond market, but neither of these factors seem to be imminent, currently,” Black said.