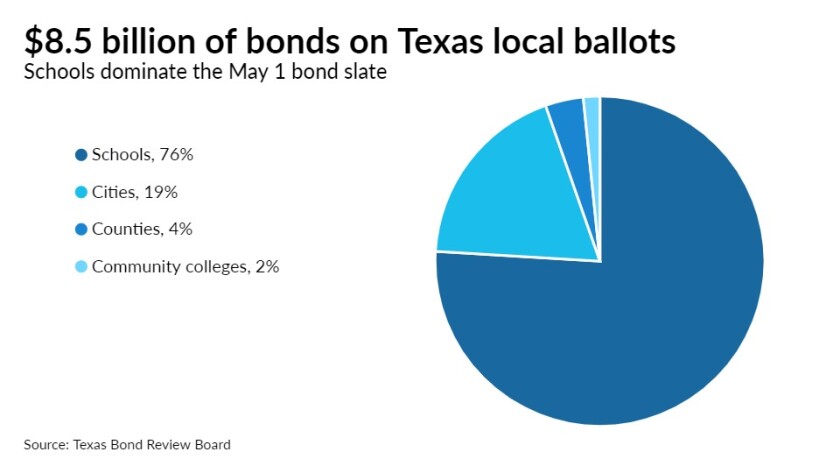 Voters will consider $8.5 billion of bonds on local ballots across Texas Saturday, including $884 million of proposals that were rejected Nov. 3.

The vote comes a year after the COVID-19 pandemic erased the traditional May bond ballot slate.

Some proposals originally scheduled for May 2020 were moved to Nov. 3 alongside the presidential election. Still, about $2.5 billion of bonds from 29 issuers up for a vote last November were also canceled.

One of the largest proposals comes from Northwest Independent School District with nearly $746 million of school bonds in the rapidly growing northern suburbs of Fort Worth.

In November, voters in the district overwhelmingly rejected $986 million of bonds. This time, NISD broke the proposals into four parts.

To increase the appeal of the proposal, the district cut about $240 million from the project list and honed its pitch for four propositions A-D.

“This time around, we knew we just needed to stick to the simple needs of the students — school buildings, which take up a huge chunk of Prop A, and things that you need with those school buildings,” Joe Washam, a member of the Long Range Planning Committee, said in a school district press release.

The district worked with community members and the planning committee to eliminate 35 projects from the failed November bond proposal.

On the northern outskirts of Dallas, the developing Ponder ISD is seeking approval of $75 million of bonds six months after they were rejected.

Near the Red River in North Texas, Wichita Falls ISD is asking voters to reconsider more than $13 million for athletic facilities rejected Nov. 3. Voters in the district narrowly approved $276 million of bonds for land for two new high schools.

This week’s proposals face a different electorate than those that appeared on Nov. 3 ballots. That presidential election produced the largest voter turnout in state history. This week’s election, for which light early voting is underway, is expected to draw far fewer voters for bonds and local elections.

Northwest ISD’s proposal is slightly lower than the $750 million authorization requested by another Dallas-Fort Worth area school district, Richardson ISD. As one of the older suburbs north of Dallas, Richardson needs to renovate aging schools while Northwest ISD needs to build new ones.

Another issuer in the DFW area, the city of Irving, is placing $563 million of bonds on the ballot after cancelling plans for a vote on those bonds last November.

The triple-A-rated city with a population estimated at 242,000 has in recent years pursued convention center and entertainment business that was severely impaired by the COVID-19 pandemic.

The city has also benefitted from its proximity to Dallas-Fort Worth International Airport, but that advantage weakened amid a dramatic drop in travel.

“The needs for infrastructure spending in our city are tremendous,” Mark Cronenwett, citizen bond task force committee chair, told Irving City Council. “There’s been a lot of deferral that has been going on, deferred maintenance and construction that needs to be addressed.”

Plano, a city that competes with Irving as a corporate hub in the Dallas suburbs, will ask voters to approve $364 million of bonds for traditional city projects such as roads and other infrastructure.

Grand Prairie, one of the Mid-Cities between Dallas and Fort Worth, is asking voters to approve a $75 million economic development bond proposal.

The bonds would add a 275-room hotel and restaurant to the city’s Epic Central entertainment and fitness development.

Mayor Ron Jensen said Grand Prairie would also use the bond money to buy land or buildings in downtown in order to partner with developers for restaurant, retail or housing.

In Central Texas, voters in Coryell County will vote on $30.9 million of general obligation bonds for a county jail. Experience has shown that bonds for detention centers are among the hardest to sell to voters.

The county neighboring Ft. Hood Army Post is spending $1.11 million this fiscal year to house overflow inmates in at other county jails. Coryell County Sheriff Scott Williams said this month that the jail had exceeded capacity, with 95 inmates in its 92-bed facility.

If the jail is found non-compliant under Texas law, the county would be forced to send all of its inmates to other facilities, Williams said.

In nearby Bell County, Temple College in the city of the same name is asking voters for nearly $125 million of bond authority.

The bonds would finance the expansion and renovation of the community college’s Health Sciences Center and the construction of a new Temple College Center.

If the bonds are approved, the new facilities would be completed by 2025, when Temple College will celebrate its 100th anniversary.

In San Antonio, voters are not considering bonds but rather how bonds can be used.

Salt Lake City, Dallas And Denver Are Expected To Have The Biggest Inventory Gains In 2023
Stocks making the biggest moves midday: Meta, Align Technology, Coinbase, Eli Lilly and more
Stock Trading Mistake: When You Are Right, But Still Lose
Small Account Options Strategy with a Big Return on Investment
How to Choose the Right Stock Broker for YOU and YOUR Trading Needs