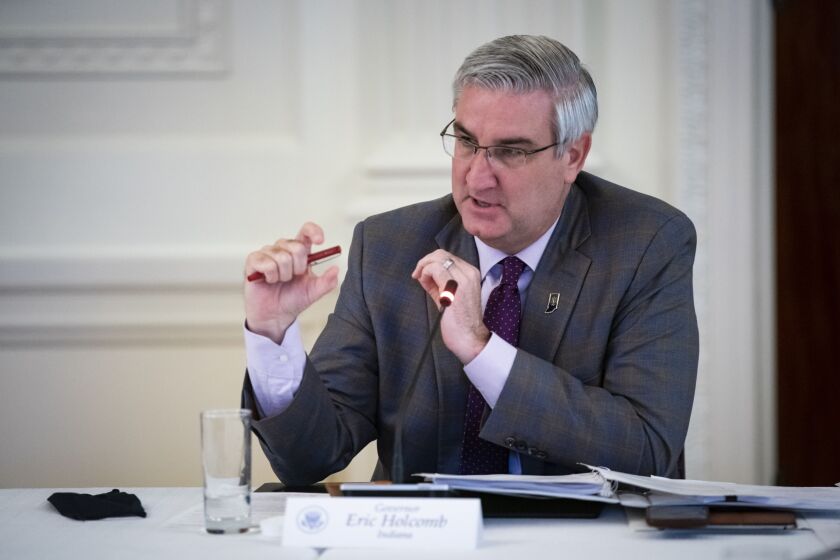 Gov. Eric Holcomb reached an agreement on a revised budget with his fellow GOP legislative leaders who then passed the $37.4 billion package for the biennium beginning July 1 during the legislature’s last session day Thursday.

“Indiana will be in an even stronger position with this new budget which prioritizes investing in Hoosiers,” Holcomb said after the close of the session.

The triple-A-rated state also anticipates receiving $3 billion from the new American Rescue Plan which was not incorporated into Holcomb’s initial budget proposal or versions proposed by the House and Senate. The governor and legislative leaders highlighted the heavy use of one-time federal dollars toward one-time measures like project financing and debt payoff.

The budget earmarks special reserve accounts of $550 million for certain state construction projects and another $900 million for future projects. The reserve status would be lifted after the state receives final guidance from the U.S. Treasury on spending rules for the ARP funds.

The state’s budget reserves, made up of a rainy day fund and various general fund and other account balances, would be restored to pre-pandemic levels of about $2.3 billion. They ended fiscal 2020 at $1.4 billion.

The budget raises kindergarten through 12th grade allocations by 4.6% in the first year and then 4.3% in the second year bringing total funding to $16 billion. The budget also covers $600 million in teacher raises. The plan also restores a 7% cut to higher education made early in the pandemic as the state expected deep tax losses to continue and in the second year hikes funding by 2%.

On the economic development front, the budget puts $500 million of funding towards regional grants, $250 million to expand broadband and $160 million for water grants.

The budget passed on a bipartisan vote of 96-2 in the House and 46-3 in the Senate with Democrats saying it didn’t meet all their priorities and many opposing an expansion of private school vouchers, but they said it beat out past spending packages.

“The ability for Indiana to invest more in our people is absolutely thanks to Joe Biden’s American Rescue Plan,” said Senate Democratic Minority Leader Paul Taylor, D-Indianapolis. “That said, I still have concerns about the direction of our state. We absolutely do not support the ongoing disproportionate funding to vouchers in the budget.”