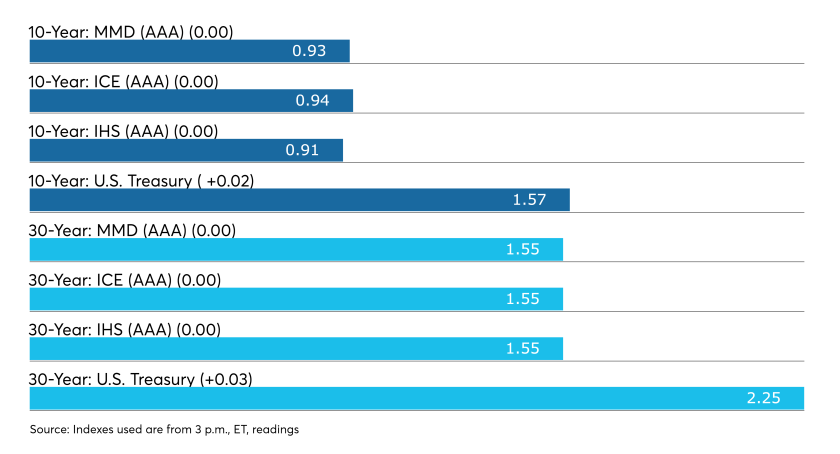 The municipal bond market took a breather on Friday after digesting nearly $10 billion in new issuance on the week. Supply is expected to drop to $5.5 billion in the upcoming week.

After a week marked by a strong and steady secondary market, the triple-A muni benchmarks remained flat for the sixth straight session as Treasuries were little changed.

Volume is expected to fall to $5.5 billion, according to IHS Ipreo, in a calendar consisting of $4.2 billion in negotiated deals and $1.3 billion of competitive sales.

While stocks fell on Thursday in reaction to President Biden’s proposal to raise the marginal income tax rate to 39.6% from 37% and nearly double the capital gains tax to 39.6% for people earning more than $1 million, municipals remained steady, Pietronico said Friday.

“The Biden proposal to lift tax rates on the wealthy also added to the positive tone for municipal bonds,” he said.

With most of the week’s largest deals completed, the market absorbed the hefty supply and continued to perform well, according to a New York trader.

Economists polled by IFR Markets expected 886,000 sales in the month.

“I have to believe that either builders, buyers or both got a bit spooked by last month’s rate rise and wanted to get going before they risked even higher rates or commodity prices,” said Steve Sosnick chief strategist at Interactive Brokers.

“Virtually all of the cyclical and demographic factors underlying demand for homes are positive,” according to Mickey Levy, Berenberg chief economist for the U.S., Americas and Asia. “Additional boosts are provided by the stay-at-home trend and rapid increases in prices, which lift expectations of further home price increases. Construction activity is expected to remain strong and overall housing activity is projected to rise significantly in 2021-2022.”

“The strength in home sales is adding significantly to consumption of household durable goods,” he said. “This trend is expected to continue.”

“Properties are being snapped up after an average of only 18 days on the market, also a record low,” noted Yelena Maleyev, economist at Grant Thornton.

“Builders will continue to experience difficulty keeping up with demand, especially at the lower end of the market,” she added. “Sales growth will continue to come from homes not yet built.”

Low mortgage rates and “older millennials finally buying their first homes,” will keep the market hot, Maleyev said. “Builders will continue to experience difficulty keeping up with demand, especially at the lower end of the market.”

Boyle: The Fed is doing its job
A year into the pandemic, the Federal Reserve can “remain patient” and not “deploy other tools” to try to rein in longer rates, said Joe Boyle, fixed income product manager at Hartford Funds.

“They’ve discussed buying longer dated bonds through the bond purchase program or yield curve control — something they seem very reluctant to want to try,” he said.

“Cutting rates to zero and creating the credit facilities a year ago was a huge undertaking to help calm the markets and today markets are functioning well and really the onus is more on Congress and the White House to attempt to bring back to life the sectors and/or individuals that haven’t fully recovered,” he said.

While the February-March selloff produced a total spike of 47 basis points in 10-year AAA muni rates, almost half of that has come back down, BofA municipal research strategists Yingchen Li and Ian Rogow wrote in the report.

“The long and slow selloff really started in early August 2020 when the 10-year AAA reached 0.58%, a record low, according to the MMD scale,” they said. “By late March 2021, it peaked at 1.16%, and the entire selloff resulted in a doubling of the 10-year AAA yield. Our second quarter rally target of the 0.75% area represents a two-thirds retracement of the entire selloff.”

They added that the muni market rally this round has synchronized well with the Treasury market while ratios have stayed in the low ranges.

“As we stated before, low ratios should prevail for much of the year and any blip should present a good opportunity on relative values,” Li and Rogow wrote.

Treasuries were slightly weaker as stock prices traded up.

The Massachusetts Clean Water Trust is set to offer $354.7 million on Thursday in two series — $142.8 million of state revolving fund bonds in Series 23 A green bonds and $211.8 million of Series 23B sustainability bonds (Aaa/AAA/AAA/NR). Morgan Stanley is the lead manager.

The Lamar Consolidated Independent School District, Texas, is set to sell $233.8 million of unlimited tax schoolhouse bonds (Aaa/AAA) on Tuesday. The bonds are insured by the Texas Permanent School Fund Guarantee Program and mature serially 2023 to 2041 with terms in 2046, 2051, and 2061. Raymond James & Associates is the lead bookrunner.

The Northside Independent School District, Texas, is planning to sell $128.2 million of unlimited tax refunding bonds (Aaa/ /AAA/ ) in taxable series 2021 on Tuesday. Insured by the Texas PSF, the deal is structured serially from 2022 to 2041 and is being senior managed by Ramirez & Co.

The Board of the Trustees of Northern Illinois University is set to sell $106 million of auxiliary facilities system revenue refunding bonds ( /AA/ / ) on Tuesday. The bonds are insured by Build America Mutual Assurance Co. and are being priced by bookrunner Piper Sandler.