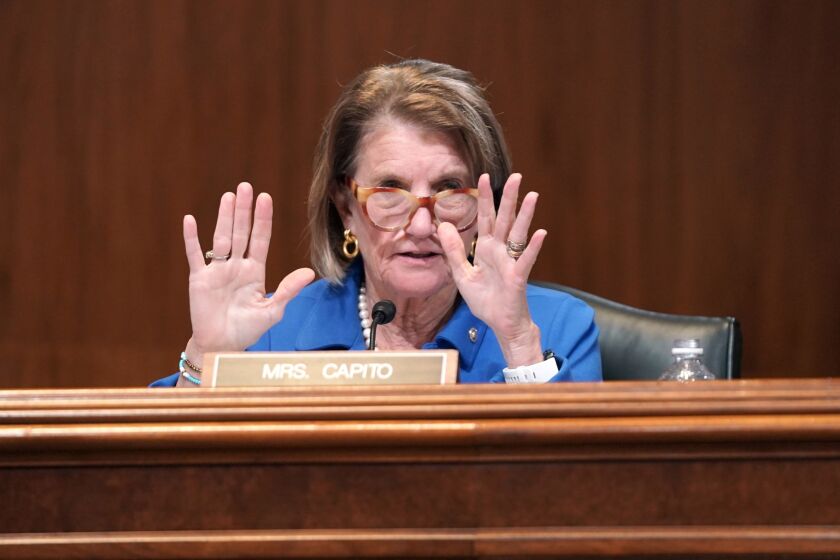 With a gas tax seemingly off the table in President Biden’s plan to pass an infrastructure bill, lawmakers and transportation advocates are looking to vehicle miles traveled fees.

This comes as Senate Republicans begin to draft their own infrastructure bill, that comes in much smaller than President Biden’s $2 trillion proposal. Republicans’ $600 billion to $800 billion proposal would diverge from Biden’s plan to pay for it through a higher corporate tax rate, and instead impose a user fee to raise revenues.

Transit advocates expect the GOP proposal to be more tailored to traditional infrastructure, rather than the more expansive Biden proposal. The American Association of State Highway and Transportation Officials said its not clear when the plan will be released, but expect a broad outline, not specific legislative language.

Republican senators are not alone in wanting infrastructure to be paid for through user fees. Senate Environment and Public Works Committee Chair Tom Carper, D-Del., told the Brookings Institution during its event Thursday that road and bridge users should pay for infrastructure and called a vehicles miles traveled fee “the future.”

A VMT fee was also the consensus to pay for infrastructure during a Senate EPW Committee hearing on Wednesday.

EPW Ranking Member Sen. Shelley Moore Capito, R-W.Va., said those who use the roads should help pay for them.

“All who use our surface transportation system should contribute to its upkeep and expansion,” Capito said.

The Highway Trust Fund, the source of funding for federal surface transportation projects, could be bolstered by a VMT fee. It’s been running on gas taxes for years and is running out of fuel.

The HTF spends 20% on transit, while 80% goes to highways. Transit does not contribute to the fund.

General funds transfers authorized in previous legislation have supported the HTF for the past 13 years. Some suggested ways to replenish the HTF have been through increasing the federal gas tax, charging electric vehicle drivers a fee, imposing a vehicle miles traveled charge, and tolling.

These and relying more on private sector investment through public-private partnerships are all possibilities, the Congressional Research Service said in a March report.

It is hard to say precisely how long it would take to implement a national VMT, said Susan Howard, program director for transportation finance at AASHTO. Some commissions in the past have said it could take five to ten years.

“You could set a future date of when new cars would have to come with the technology to implement this kind of system for charging, but that wouldn’t happen overnight,” Howard said.

“There are significant questions about the revenue collection, the administration,” Howard added. “It would be a dramatic change to shift from what we have now to a mileage-based fee.”

So far 15 to 20 states have been involved in VMT pilots either regionally or independently, Howard said. Current surface transportation legislation is expiring at the end of September 2020 is making Congress anxious about how to fix the HTF, Howard said.

“Congress is feeling anxious as we get closer to the FAST Act extension expiring, as we know the problems with the gas tax are not going away, as we know more electric vehicles are going to be coming online,” Howard said.

Those factors are putting attention onto a VMT, she said.

“The question for Congress to figure out is what’s next, what makes sense to do in this next bill,” Howard said.

Though raising the federal gas tax seems like a logical solution, Congress has just never been able to do it in in recent decades Howard said. That along with U.S. car manufacturers planning to move to an all electric fleet and a recognition that problems with the gas tax are not going away means lawmakers will look elsewhere, Howard added.

During an EPW hearing Wednesday, Dr. Joseph Kile, director of Microeconomic Analysis at the Congressional Budget Office, projected balances in both the highway and transit accounts of the HTF will be exhausted in 2022.

“If the taxes that are currently credited to the trust fund remained in place and if funding for highway and transit programs increased annually at the rate of inflation, the shortfalls accumulated in the Highway Trust Fund’s highway and mass transit accounts from 2022 to 2031 would total $195 billion, according to CBO’s baseline budget projections as of February 2021,” Kile wrote.

“In addition, such a tax would raise privacy concerns if calculating and collecting the tax required the government to track people’s movement and use of vehicles,” Kile wrote. “Apart from those challenges, a VMT tax has implications for equity that are similar to those of fuel taxes—namely, the burden, relative to income, is greatest for lower-income households because the money paid in taxes for highway use would constitute a larger share of their total income than of higher-income households’ total income.”

EPW also heard recommendations from others testifying Wednesday. Robert Poole, director of transportation policy at the right-leaning Reason Foundation said the federal government should continue to support VMT pilot programs, focus on miles based user fees in the trucking industry and make the HTF a true highway user fee for a short-term fix, instead of spending the fees on non-highway projects.

Sen. Cynthia Lummis, R-Wyo., was pleased to see Poole’s support of taking the mass transit account out of the HTF.

“In the meantime, increased use of tolling and P3s (public private partnerships) for major projects such as replacing billion-dollar bridges and interchanges and rebuilding corridors on the Interstate system can take some of the load off the Trust Fund,” Poole wrote.

Poole also recommended doubling or getting rid of a cap on federal private activity bonds. The federal cap is set at $15 billion and has practically run out.

“But the language of the law should also be clarified to ensure that PABs can be used to finance the rebuilding and modernization of existing transportation assets, consistent with Build Back Better, rather than just to build new capacity,” Poole said.

Senators also met during a Senate Banking Committee hearing Thursday, which led to disagreement on how much transit agencies should get getting from the federal government.

“It was transit that brought essential workers to the essential work they were doing during the period of time in the pandemic,” Menendez said. “In terms of subsidizing, we subsidize highways, we subsidize bridges, we subsidize all of those things by the federal investments that we make. So I’m not quite sure what the difference is.”

Beth Osborne, director of Transportation for America, testified at the hearing, and called for a 50-50 split from 80-20 of the HTF, with half going to transit.

“While there is frustration and people refer to transit funding being diverted from the Highway Trust Fund, this is the only way people have been willing to support a national program because we as a nation know that we need to move people through multiple modes.”