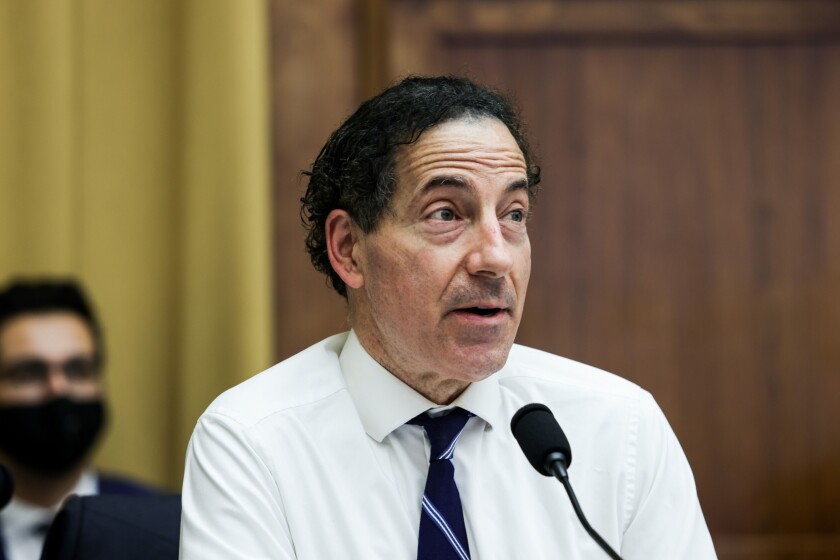 Statehood for the District of Columbia faces a Republican roadblock in the Senate that one Democratic congressman suggests could be broken by pairing it with statehood for Puerto Rico.

Democratic Rep. Jamie Raskin of Maryland said at a House hearing Wednesday that the nation has a long political history of pairing new states.

Republicans, meanwhile, are objecting to the admission of D.C. as a state as a way for Democrats to ensure majority control of the U.S. Senate.

Rep. James Comer of Kentucky, the ranking Republican on the House Oversight and Reform Committee, said at Wednesday’s markup of legislation to enable D.C. statehood that the bill “is all about creating two new Democratic U.S. Senate seats.”

“This bill is part of the progressive pathway that President Biden, Leader Schumer, Speaker Pelosi, have to reshape America into that socialist utopia, that ‘the squad,’ talk about,” said Comer.

Other Republicans on the committee voiced similar concerns about Democrats using the bill to tilt the balance of political power in Washington.

“This is about a much broader, permanent change,” said Rep. Jody Hice, R-Georgia. He said it would “permanently change the playing field of American politics, and to allow the Democrats to then add their radical, progressive agenda.”

Raskin acknowledged that political concerns have been raised throughout American history and have been resolved by compromises that led to the admission of two states at a time “like animals boarding Noah’s Ark.”

Similar compromises resulted in the Kansas-Nebraska act and the most recent statehood legislation involving Hawaii and Alaska, he said.

At Wednesday’s hearing on D.C. statehood, the House Oversight and Reform Committee approved H.R. 51, the Washington, D.C. Admission Act, sending it to the floor where a vote is expected next week.

Identical legislation passed the Democratic-controlled House last June 26 by 232-180, marking the first time that D.C. statehood has passed either chamber of Congress.

“I believe it will pass for the second time in two years,” Rep. Carolyn Maloney, D-N.Y., chair of the committee, said at Wednesday’s markup. “Unfortunately, so far Republicans have opposed our efforts. They would rather deny voting rights and self-government to more than 712,000 Americans than even consider the possibility that two senators from the new state could possibly be Democrats.”

In addition to the basic issue of the current disenfranchisement of the District’s voters in electing members of Congress, Maloney listed among her arguments for statehood, D.C.’s triple-A bond rating.

D.C. also has a population larger than two states, higher per capita personal income and gross domestic product than any state, and a government budget bigger than 12 state budgets she said.

Congressional Republicans have raised constitutional objections to explain their opposition but Raskin offered a rebuttal saying that the bill would maintain a federal district as created by the Constitution and only shrink its size.

The resized federal district would be only two square miles.

“The bill excludes ‘principal federal monuments,’ the U.S. Capitol Building, the White House, the U.S. Supreme Court Building, and federal office buildings adjacent to the National Mall and the U.S. Capitol,” said the nonpartisan Congressional Research Service. “The legislation names the resulting federal enclave ‘the Capital,’ and establishes it as ‘the seat of the Government of the United States.’”

A precedent for shrinking the District of Columbia occurred in 1846 when Alexandria, Arlington, and parts of Fairfax County were given back to Virginia in anticipation that slavery would be abolish in D.C. That eventually happened April 16, 1862 when President Lincoln signed legislation abolishing slavery in D.C.