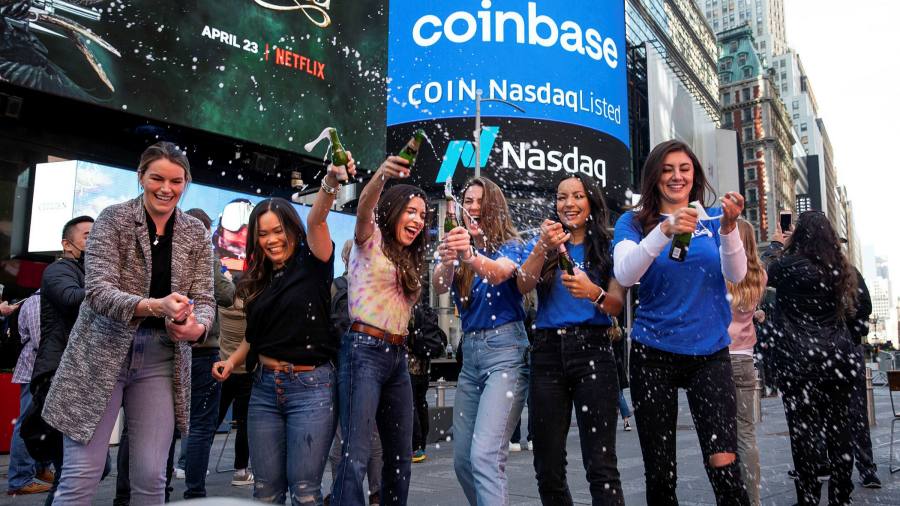 Stock market investors valued Coinbase at $75.9bn in its debut on Nasdaq on Wednesday, the first listing of a major cryptocurrency exchange and a moment of validation for the digital asset class some 12 years after the creation of bitcoin.

Shares opened at $381 each on Wednesday, giving Coinbase a market capitalisation that immediately surpassed that of the New York Stock Exchange’s parent company, ICE, which is worth $67bn. Coinbase would be valued at $99.6bn when including options and other kinds of stock-based awards.

Coinbase holds assets for 56m retail customers and operates the largest digital coin exchange in the US — a business that has rocketed in recent months along with the price of bitcoin and other cryptocurrencies.

“What we hope is it just brings a lot more transparency to this industry, and a lot more focus,” said Alesia Haas, chief financial officer of Coinbase. “We’ve seen that with the attention that Coinbase has received during the past few months.”

The listing certifies Coinbase co-founder and chief executive Brian Armstrong as a multibillionaire, with a stake worth $15.1bn at the opening price. Coinbase’s other big investors include the venture capital groups Andreessen Horowitz and Union Square Ventures and Armstrong’s co-founder Fred Ehrsam.

Coinbase immediately became one of the 120 most valuable public companies in the US, ahead of Discover Financial Services, First Republic Bank and Nasdaq, the stock exchange its shares are trading on. The company went public through a direct listing, an alternative to an initial public offering that does not raise any money.

On the cryptocurrency exchange FTX, speculators had bid a Coinbase-tied futures contract above $600 a token in the lead-up to the listing, implying they viewed the company as worth more than $150bn. The contracts fell sharply as Coinbase was indicated to open trading at a much lower price.

Coinbase settled on a direct listing after considering a traditional IPO and the possibility of selling equity tokens, said Barry Schuler, a partner at DFJ Growth, which first invested in the company in 2015. The choice allowed normal investors to immediately begin purchasing shares.

“There’s no question that millennials and [younger people] really gravitate toward crypto,” Schuler said. “They look at the traditional financial infrastructure and they see it as rigged, and they’re right.”

Coinbase’s fate is intrinsically linked to demand for bitcoin and ethereum, with the majority of its revenue tied to trading in the two cryptocurrencies. Bitcoin, one of this year’s best-performing asset classes, hovered around $63,400 a token as Coinbase began trading, just shy of a record high earlier in the day. Ethereum traded around an all-time high near $2,400.

Bitcoin’s supporters have touted it as a technology for transforming the world’s financial system, though Jay Powell, chair of the Federal Reserve, was pouring cold water on that idea in a public appearance just as Coinbase began trading.

Calling cryptocurrencies “vehicles for speculation”, the central bank boss said: “No one is using them for payments, for example, like the dollar. It’s a little bit like gold . . . Human beings have given gold this special value that it doesn’t have from an industrial standpoint, but nonetheless for thousands of years they’ve done that. Bitcoin is much more like that.”

Coinbase’s financial fortunes have surged with the latest bull run in cryptocurrency markets, producing a nine-fold jump in revenues to an estimated $1.8bn in the first quarter, translating to about $1.1bn in adjusted earnings before interest, tax, depreciation and amortisation.

Armstrong has said he plans to run the company at break-even over time, accounting for the cycles of cryptocurrency markets.

Coinbase was the first major direct listing for a tech company on Nasdaq, which had lost a series of large listings from companies including the gaming platform Roblox and the audio streaming service Spotify to the New York Stock Exchange.