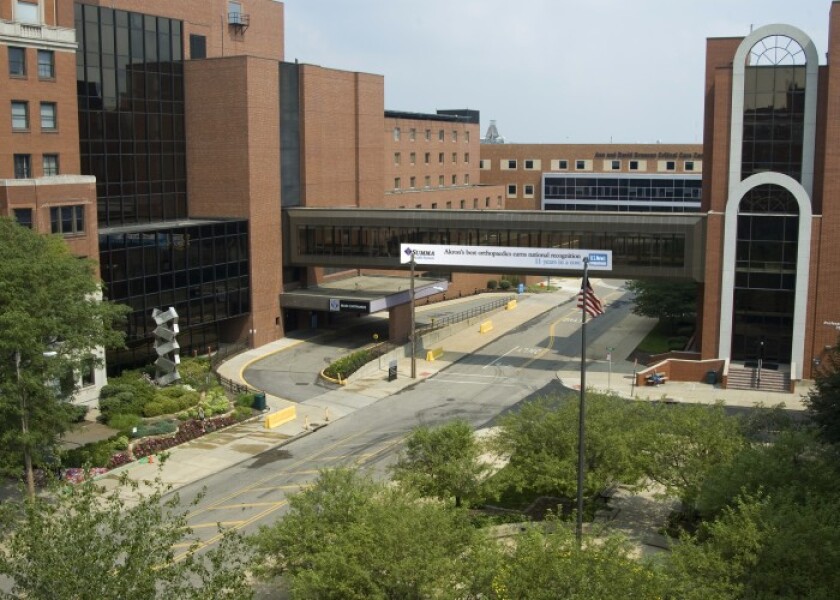 Akron, Ohio-based Summa Health enters the market Wednesday to raise funds to help pay for a behavioral health facility and repay a bridge loan that ended its partnership with HealthSpan Partners.

Both are part of the system’s strategic plans that were revised after a merger with Michigan-based Beaumont Health was nixed last May.

Ahead of the roughly $310 million taxable corporate CUSIP sale, Fitch Ratings cut the rating by one notch to BBB-plus. The action resolved the credit’s placement in January on Rating Watch Negative as it considered the fiscal impact of Summa’s early redemption of HealthSpan Partners’ partial ownership on Dec. 30, 2020 with a $240 million bridge loan.

S&P Global Ratings affirmed the system’s BBB-plus rating. The system carries a stable outlook from both rating agencies. Barclays is the senior manager. The bonds are secured by the pledge of gross receipts of the members of Summa’s obligated group and a mortgage on certain property and they may carry Assured Guaranty insurance.

HSP had purchased a 30% stake in Summa for $250 million in September 2013. The 10-year partnership between the two was due to terminate in 2023, but ended early by mutual agreement. HSP is a division of Bon Secours Mercy Health System. The bridge loan being refunded with proceeds totals $240 million.

In need of capital funding, Summa had turned to the partnership with HealthSpan, a secular arm of what was then Mercy Health. The two systems have since moved in opposing directions and Summa decided to negotiate the early termination after its proposed merger with Beaumont Health was cancelled. Beaumont said only it was no longer the right fit.

“The termination” of the HealthSpan partnerhsip “will allow Summa greater independence and flexibility to pursue strategic imperatives,” Summa officials reported to investors in a recorded presentation.

The incremental debt from the new financing and along with a $100 million line of credit increases outstanding debt to just over $1 billion from $637 million as of fiscal year end 2019. The downgrade “reflects the material change in the leverage ratios, which are now more aligned with the lower rating category,” Fitch said.

While the redemption added to the system’s debt load, it removes the uncertainty over how Summa would manage the end of its partnership in 2023. “Summa’s now smaller governance board is focusing on near to intermediate strategic plans for growth while remaining an independent system for the time being,” Fitch said.

The system which has $1.46 billion of annual revenues and posted a 6.4% operating margin in 2020 holds a market leading share in the five-county region it serves in the northeast part of state.

“Despite the challenges and revenue decline brought on by the coronavirus crisis, Summa’s margins were not as severely affected due to more profitable results at its insurance division, SummaCare, during this period of reduced insurance claims,” Fitch said.
SummaCare is the system’s 25-year-old insurer.

The system shut down many elective procedures last spring for about two months at the request of Gov. Mike DeWine to deal with rising COVID-19 cases.

“We reduced our capital spending” by 20% and “furloughed our employees. We leveraged our work- from-home capabilities and also had in place a telemedicine capability that we were fortunate to be able to ramp up pretty directly and pretty quickly over that period of time and that served us well,” Keith Coleman, chief financial officer said in the investor presentation. “We quickly went to market and secured a $100 million of credit. We did draw that down to make sure that we had sufficient liquidity.”

The system also received CARES Act funds totaling $31.6 million. It took advantage of $70 million in advance Medicare payments that must be repaid over the next 29 months. The line of credit has a three-year term. A 7% margin is projected for fiscal 2021.

“The stable outlook also incorporates our view that Summa will at least sustain its current market share, reinforced by its recent and ongoing capital investments and growth strategy,” said S&P analyst Allison Bretz.

Robots could surpass workers at Amazon by 2030, Cathie Wood says
Stocks making the biggest moves midday: GM, McDonald’s, UPS, Pulte, International Paper and more
Snag The Top Of A Towering 20th-Century Palace In Bilbao, Spain
Why is the crypto market down today?
Munis firmer across the curve, outflows return