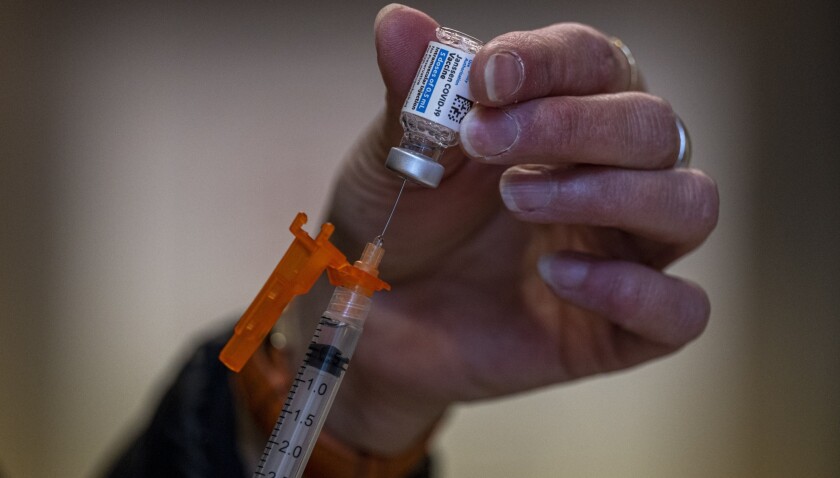 Federal Reserve Bank of St. Louis President James Bullard said that getting three-quarters of Americans vaccinated would be a signal that the Covid-19 crisis was ending, a necessary condition for the central bank to consider tapering its bond-buying program.

“It’s too early to talk about changing monetary policy,” Bullard said in an interview with Bloomberg Television’s Kathleen Hays Monday. “We want to stay with our very easy monetary policy while we are still in the pandemic tunnel. If we get to the end of the tunnel, it will be time to start assessing where we want to go next.”

About 36% of Americans had been given a first vaccine dose and 22% were fully vaccinated, according to the Bloomberg Vaccine Tracker. Centers for Disease Control and Prevention officials have urged Americans to continue to take safeguards, including restricting their travel, with the number of cases rising.

“When you start to get to 75% vaccinated, 80% vaccinated and CDC starts to give more hopeful messages that we are bringing this under better control and starts relaxing some of their guidelines, then I think the whole economy will gain confidence from that,” Bullard said.

“Cases are up right now, that is a little bit concerning,” he added, even though the vaccine strategy appears to be working.

The St. Louis Fed president’s comments echoed Federal Reserve Chair Jerome Powell, who in an interview broadcast Sunday said the U.S. economy is at an “inflection point” with stronger growth and hiring ahead thanks to rising vaccinations and powerful policy support, though Covid-19 remains a threat.

Bullard said the U.S. was in an economic boom that would lift inflation over the near term, though measures over the next few months will be distorted and not prove a good signal for underlying price measures. He said the central bank would be “less preemptive” than in the past and let higher inflation flow through to some rise in inflation expectations.

“I think there will be more inflation in 2021 than what we’ve seen in recent years, and I’d like some of that to flow through to inflation expectations,” he said.

Minutes of the central bank’s March meeting released April 7 said policy makers expect it will likely be “some time until substantial further progress” was made on employment and inflation. That refers to the tests they’ve set for scaling back bond purchases of $120 billion a month.

London’s rental market is in crisis. Here’s why and how renters are struggling
A Deep Dive into the Netflix (NFLX) and Tesla (TSLA) Earnings Charts
How many stocks should I buy?
China’s real estate crisis isn’t over yet, IMF says
Yields rise with muni one-year topping 2.50%