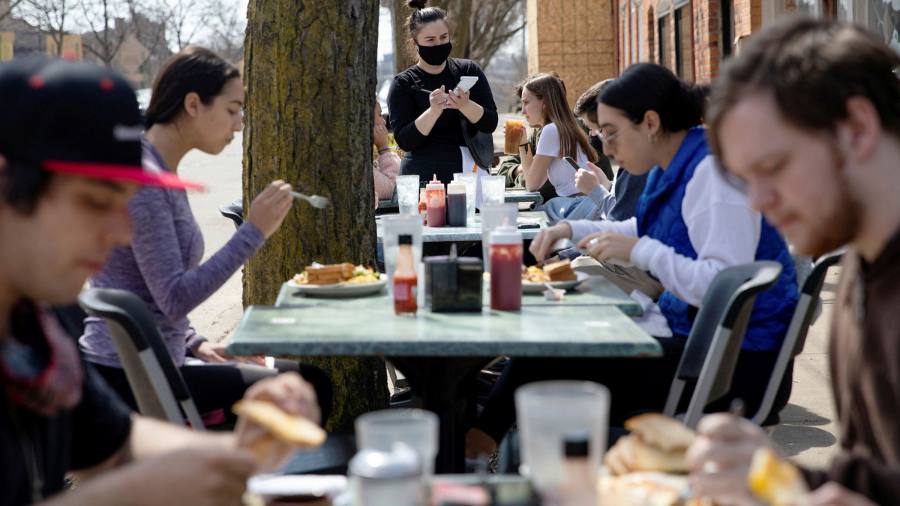 The head of the US Centers for Disease Control and Prevention has urged Michigan’s governor to shut down the state instead of asking for more vaccines as a way to control a sudden jump in coronavirus cases.

Rochelle Walensky, the CDC director, said on Monday she thought Michigan should impose fresh restrictions to combat the rapid spread of the disease, adding that a bumper delivery of vaccines would arrive too late to halt the uptick in cases.

Her comments mark a rare political intervention from the US public health body, which has so far largely remained happy to issue guidelines and let states set their own lockdown rules. They also reflect growing tension between Gretchen Whitmer, the state’s governor, and the federal government over how to quash a regional leap in cases which experts warn could sweep the whole country before enough people are vaccinated to stop it.

“Sometimes you can’t even do it at the capacity that you need. But, really, what we need to do in those situations is shut things down.”

She added: “I think if we tried to vaccinate our way out of what is happening in Michigan, we would be disappointed that it took so long for the vaccine to work, to actually have the impact.”

Whitmer was praised by many Democrats last year for imposing lockdown measures even in the face of public attacks from former president Donald Trump.

In recent days, however, she has resisted the call to reimpose some of those measures, asking schools to abandon in-person teaching and youth sports, but not instructing them to do so.

Instead, the Democratic governor has called for the federal government to provide her state with a larger allocation of vaccine doses over the coming weeks.

She said over the weekend: “We are seeing a surge in Michigan despite the fact that we have some of the strongest policies in place: mask mandates, capacity limits, working from home.

“Despite all of that, we are seeing a surge because of these variants. And that’s precisely why we’re really encouraging them to think about surging vaccines into the state of Michigan.”

Almost 7,000 people in Michigan were confirmed to have the disease on Saturday, according to the most recent numbers from the state health department — close to the record high set last year. Hospitalisations due to the virus are also close to record levels, at 4,118 people, while deaths from the disease have risen from about 15 a day to close to 45. The state has a population of almost 10m.

The state’s jump in cases comes even as the country continues to accelerate its vaccination programme. About 4.6m people were vaccinated in the US on Saturday — a daily record — with almost half the adult population having now received at least one dose.

Health officials believe the success of the vaccine rollout may have made even unvaccinated people feel overly-confident about the trajectory of the disease. Doctors in Michigan say the people filling up their wards are younger than during earlier waves.