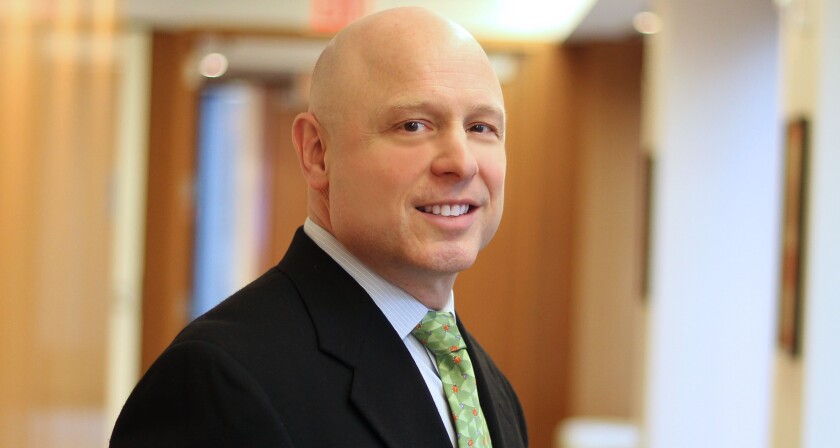 The municipal market took a breather on Friday after a busy week which brought with it continued strength as triple-A general obligation yield curves were largely unchanged and Treasuries were stronger.

A hefty slate of taxables, corporate CUSIP and unversity-led issues will dominate the calendar next week.

An estimated $7.33 billion of new supply is headed to market. That compares to total sales of $7.60 billion this week.

In another nod to improving credit situations after federal stimulus dollars, vaccination and reopening efforts, Moody’s Investors Service on Friday affirmed New Jersey’s A3 rating and revised the state’s outlook to stable from negative.

“While the negative outlook connotes downward pressure and a higher possibility of a downgrade in the next 12-24 months, a stable outlook translates to stability and the expectation the rating should not change for the same time period,” the agency said. “The rating and new outlook applies to New Jersey’s forthcoming $400 million sale of general obligation Bonds (various purposes) (tax-exempt), which are expected to price the week of April 19.”

Moody’s has also affirmed the A3 rating on New Jersey’s outstanding general obligation debt, and revised the outlook to stable from negative, along with various other state-related credits.

For Friday, the market was mostly quiet with little trading activity and a steady tone as participants packed up for the weekend.

Treasuries were trading flat and marginally softer to close the week, but still stronger at 1.66% compared to 1.74% a week prior.

Ratios aren’t budging as municipal to UST outperformance is not abating. The 10- and 30-year benchmarks closed at 62% and 70% on Friday, according to Refinitiv MMD while ICE Data Services had the 10-year at 62% and the 30 at 71%.

“Retail is not in love with these rates, but for institutions and banks munis still make a lot of sense,” a New York money manager said.

The new issues consist of $5.4 billion of negotiated municipal bond sales and $1.92 billion of competitive sales, versus a revised $4.66 billion and $2.94 billion.

“If you are an issuer with room to price exempt paper, no matter your rating, I would highly suggest that now is the time,” a New York trader said. “You have the 10-year itching to fall below 1%, which it did on BVAL, so it wouldn’t be a stretch to see that kind of level stick for a time. We are in an incredibly interesting time right now with tax rates, stimulus, potential infrastructure investments all colliding into something meaningful for the muni market.”

April is starting as an extension of March, which brought benchmark 10- and 30-year muni yields lower, noted Jeff Lipton, managing director of credit at Oppenheimer & Co. said on Friday.

“While Treasuries sold off appreciably last month, munis are outperforming a more stabilized Treasury market in April,” he said.

“This week’s move to lower yields has been back-dropped by a well-placed primary market and a strong bid in the secondary,” Lipton said. “The story for munis is simple; demand has kept munis well-performing and on a different return trajectory than the one followed by U.S. Treasuries.”

Lipton said he expects continued outperformance by the municipal asset class as long as technicals hold in.

“There is rather lofty amounts of sidelined cash still seeking investment guidance and there is ample room to put much of this money to work, despite somewhat lower relative value ratios compared to a week ago,” he said.

“Fund flows and [exchange-traded funds] contributions have been quite active and we expect this trend to continue given a number of intersecting factors that have made munis the fixed income investment du jour,” Lipton added.

Both the improving economic and political landscape has contributed to the improvement in the market.

In the latest progress on the stimulus plan, on Friday it was announced that President Joe Biden plans to meet with a bipartisan group of U.S. House and Senate lawmakers Monday on his proposed $2.3 trillion infrastructure and jobs plan.

Inflation talk redux
A larger-than-expected jump in March producer prices suggests inflationary pressures will increase in the near term, at least on a temporary basis, but it will take months for analysts to determine if inflation will become an issue.

Economists polled by IFR Markets expected the headline number to rise 0.5% and the core to increase 0.3% for the month, with 3.8% and 2.7% gains, respectively for the annual numbers.

“We know there is inflationary pressure today, but there remains a significant amount of uncertainty as to whether the pressures will prove temporary as supply chains normalize over the course of the year,” according to Scott Ruesterholz, portfolio manager at Insight Investment.

The uncertainty of how long inflation pressures remain high is “challenging” markets, he said. And this release “gives ammunition to both sides of the argument,” he said. “Headline inflation is moving higher, yes, but more persistent categories, like health care services rose a more modest 0.2%. We continue to be very focused on health care and shelter inflation to see whether the rise in inflation that is now occurring proves durable.”

“It appears that much of the PPI increase came from finished goods,” which grew 1.3% in the month, said Steve Sosnick chief strategist at Interactive Brokers.

While the year-over-year gain “could sound frightfully high,” Sosnick said, “bear in mind that the 3.8% estimate was already a sizable bounce from a weak level that was registered just as lockdowns were taking hold.”

The large gains were not surprising to Greg McBride, chief financial analyst at Bankrate.com, who expects high reads for the next couple of months, when compared to year-ago levels.

During the early stages of the pandemic, March through may, prices fell, so these numbers offer “the appearance of outsized increases.”

After those drops “wash out” there will be “a true sense of the pace of price increases and whether those increases are temporary or more sustained,” McBride said.

Stronger demand coupled with supply chain issues are also pushing up producer prices. “Both of these will lead to increases in prices now but at a pace that likely proves to be only temporary,” he said.

Sosnick believes that it’s “hard to read too much” into PPI because it “tends to take a back seat” to the consumer price index and the personal consumption expenditures deflator, which give a better read of how much of price increases producers can pass along to consumers.

“It’s a big clue to those numbers, but not with an ironclad correlation,” he said.

Stock traders chose to focus on comments from Federal Reserve Vice Chair Richard Clarida and Dallas Fed President Robert Kaplan who see the gains as “transitory,” so the Fed “will be relatively slow to pull the trigger,” Sosnick said.

Also released Friday, wholesale inventories grew 0.6% in February, following an upwardly revised 1.4% gain in January, initially reported as a 1.3% increase, while wholesale sales fell 0.8% after a 4.4% jump a month earlier.

The State Public Works Board of the State of California (Aa3/A+/AA-/) is set to price $359.1 million of lease revenue bonds, 2021 Series B. Loop Capital Markets will run the books.

The Board of Regents for the Oklahoma Agricultural and Mechanical Colleges Oklahoma State University (/AA-/AA-/) is set to price $104.3 million of taxable general revenue and refunding bonds, Series 2021B, serials 2021-2036, terms 2041, 2045. RBC Capital Markets is lead underwriter.

Board of Regents for the Oklahoma Agricultural and Mechanical Colleges Oklahoma State University (/AA-/AA-/) is also set to price $76.1 million of tax-exempt general revenue and refunding bonds, serials 2021-2041, terms, 2046, 2051, on Wednesday. RBC Capital Markets will run the books.

On Wednesday, gilt-edged Delaware is planning to sell $293.1 million of GO bonds.

Lynne Funk contributed to this report.

The Federal Reserve is likely to hike interest rates again. What that means for you
Top Wall Street analysts like these stocks for maximum returns
Blur NFT Marketplace Surges in Volume and Market Share, Rivaling Industry Leader Opensea
Why is Bitcoin price down today?
Biden administration rolls out a blueprint for a ‘renters bill of rights’ – Here’s what it includes