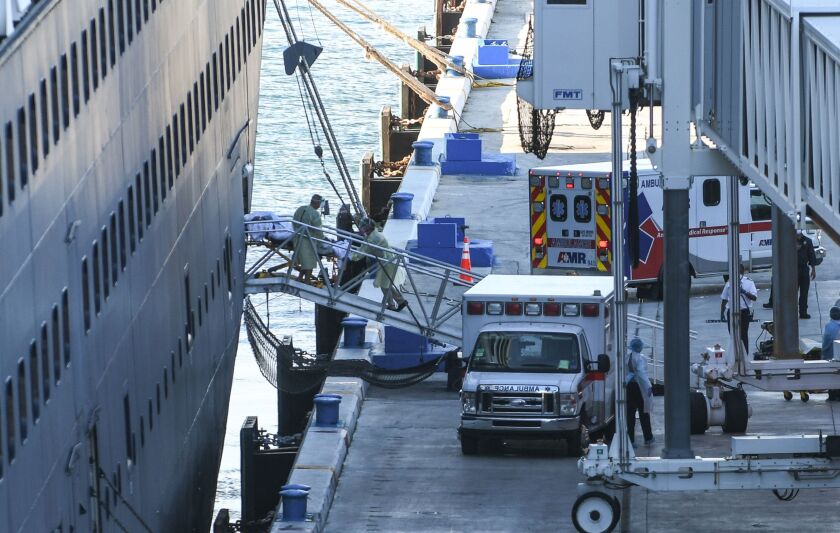 Florida has filed a federal lawsuit against the Biden administration and the Centers for Disease Control and Prevention for safety orders that have continued to keep cruise ships locked at the dock amid a pandemic that killed dozens of cruise ship passengers in the early days of the outbreak.

The suit alleges that the Centers for Disease Control and Prevention’s “Conditional Sailing Order” is so stringent that cruise lines can’t comply with it, an action which officials say is hurting the state’s travel industry.

“We must allow our cruise liners and their employees to get back to work and safely set sail again,” DeSantis said at a press conference at the Port of Miami. “To be clear, no federal law authorizes the CDC to indefinitely impose a nationwide shutdown of an entire industry. This lawsuit is necessary to protect Floridians from the federal government’s overreach and resulting economic harm to our state.”

“Cruises are a vital part of Florida’s tourism industry — employing thousands and boosting our state’s economy,” Moody said in filing the suit. “Every day the federal government unfairly keeps this economic giant docked, our economy suffers.”

Three large cruise operators have headquarters in Florida — Carnival, Royal Caribbean and Norwegian Cruise Line — though all the ships they sail from the Sunshine State are foreign-registered and foreign-crewed.

“We don’t have a direct response to a lawsuit nor a comment on a specific legal action, but I will just reiterate that the CDC guidance is based on data and health and medical guidelines, hence that’s why they put it out and why they regularly update it,” White House Press Secretary Jen Psaki said a at daily briefing.

The formal CDC recommendation is that all people avoid travel on cruise ships, including river cruises, worldwide, because the risk of COVID-19 on cruise ships is very high.

As COVID-19 vaccine distribution continues to increase, other industries such as airlines, hotels, restaurants and theme parks have already opened with safety measures and capacity protocols in place.

According to Thursday’s lawsuit, the CDC does not have the authority to issue a year-and-a-half-long nationwide lockdowns of entire industries. Florida also claims the CDC’s actions are arbitrary and capricious and violate the Administrative Procedure Act.

Cruise ships played a starring role in the early days of the coronavirus pandemic: Carnival’s Diamond Princess held the world’s attention in February 2020, during a quarantine in Yokohama, Japan. Ultimately more than 700 passengers and crew caught COVID-19 and 14 died, underscoring the transmission risks in the enclosed and largely indoor environment of a passenger ship.

DeSantis was much less welcoming when one of Carnival’s Holland America ships, amid an outbreak that ultimately killed four passengers and crew, was trying to dock at Port Everglades, Florida, in March 2020.

Florida’s complaint asks the court to set aside the CDC’s actions and compel it to allow cruises to operate with reasonable safety protocols which have been enacted in other countries that now operate cruises. It says without court intervention Florida will lose hundreds of millions of dollars.

The vast majority of cruise ships around the world remain out of operation; in a recent story industry trade publication Cruise Industry News identified less than a dozen large ships operating this month worldwide out of many hundred.

“It is economically imperative to find the pathways to reopening, and the evidence is clear that a layered approach to health and safety allows the safe resumption of travel,” the Cruise Lines International Association said in a recent statement. “We join the calls to identify the way toward lifting the Conditional Sail Order and allowing the phased resumption of cruise operations as quickly as possible.”

The CDC issued a no-sail order in March 2020 and the cruise industry in Florida and elsewhere totally closed down. A September report from the Federal Maritime Commission last September estimated that in the first six months of the pandemic, the state’s losses due to the shutdown totaled $3.2 billion in economic activity, including the loss of 49,500 jobs paying $2.3 billion in wages. The CDC later replaced the order with the current “phased-in” approach.

“These federal bureaucrats, who have no concept of what is actually happening out in the real world, have never had to face the reality of a prolonged furlough or have had their job jeopardized by the pandemic,” said Congressman Carlos Gimenez. “I guarantee if it were their job on the line and they had to handle the things hardworking Americans have had to face ahead of this pandemic, they would find the solution and rectify this issue immediately.”

The American Association of Port Authorities said Thursday that it “applauds the Biden administration’s significant advances in battling the pandemic, while also safely reopening other tourism sectors. Ports are confident in their role to see the safe restart of cruising on track with President Biden’s July 2021 goal of Americans safely enjoying a ‘new normal’ this summer.”