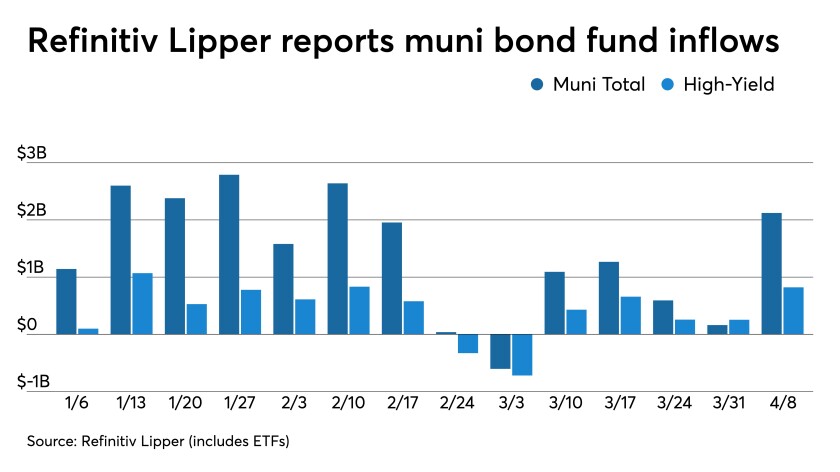 Municipal bonds improved by two to five basis points, with the biggest moves out longer as an active and diverse primary re-priced to lower yields and stronger U.S. Treasuries helped the tone.

“That is helping the market and supporting the new levels we are seeing in the primary and secondary market,” a New York trader said.

Triple-A benchmarks were lower by two to five basis points, with the 10-year just above 1% on Refinitiv MMD, ICE Data Services and at 1% on IHS Markit, while Bloomberg BVAL’s 10-year fell below the threshold to 0.99%.

Thursday’s market had a “good tone and is gapping higher with a lot of demand out there right now,” the trader said. “The firmness in the Treasury market has supported what’s going on in our marketplace.”

“I think that given the fact that taxes don’t seem to be going down any time soon and supply is relatively manageable, that puts us in a pretty good place here,” he said.

That is especially true given the lack of supply in the municipal market lately and what is looking to be a lighter week ahead.

“We haven’t seen supply pick up,” he said. “Some reports say we will start to see some more taxable supply with the new infrastructure plan, but details on that won’t come out for a couple of months.”

Refinitiv Lipper reports $2.1B inflow
In the week ended April 7, weekly reporting tax-exempt mutual funds saw $2.122 billion of inflows. It followed an inflow of $160.973 million in the previous week.

The four-week moving average remained positive at $1.036 billion, after being in the green at $778.254 million in the previous week.

Powell on inflation
Hiccups, such as the blockage in the Suez Canal, or recent supply chain issues could cause transitory inflation, Federal Reserve Chair Jerome Powell said Thursday, but the Fed only worries about persistent inflation, where prices rise “year after year after year.”

“The nature of a bottleneck is that it will be resolved,” Powell said on a livestream of the International Monetary Fund’s debate on global economy. “Supply chains will adapt and become more efficient.”

These incidents raise demand in the short-term, and lift “prices momentarily but we do not expect it to continue persistently,” he said. And, should the Fed err and the price gains are “persistently above 2%, we would react,” Powell said. “That is our job.”

Of course, the Fed does not believe that is the likely outcome, he reiterated. But, “if the need arises, we have the tools to guide inflation back down to 2%,” he said, by increasing the fed funds rate target.

Fiscal support and vaccinations have helped the economy, Powell said, although there is “still 20% unemployment in the bottom tier of waged employees.”

Kristalina Georgieva, managing director of the IMF said, “Vaccines will be most important for recovery, more important than any fiscal or monetary policy.”

“Chairman Powell reiterated that the Fed will wait to see actual, not just forecasted, progress in the economy before the Fed begins to taper,” said Scott Ruesterholz, portfolio manager at Insight Investment.

But despite the chair’s insistence that inflation will be short-lived, he added, “While the central case is that the rise in inflation proves temporary given the still-sizable output gap, there is considerable uncertainty around this forecast, given the level of excess savings and fiscal stimulus that will be hitting the economy as it reopens.”

And that puts the Fed at risk of being behind the curve, as the inflation outlook remains “extremely uncertain.” Yet, Powell’s words “make clear the Fed will risk acting too late rather than acting too soon and choking off the expansion prematurely.”

Patience was preached by Federal Reserve Bank of Minneapolis President Neel Kashkari, who added he is not worried about inflation and is “comfortable” with the Fed’s new framework.

“We are gonna watch the labor market, inflation and inflation expectations but the key is we not going to shortcut the economy, just because we think inflation is around the corner,” Kashkari said at an event hosted by the Economic Club of New York on Thursday.

“In the past, we preemptively made changes because we thought inflation was around the corner and it wasn’t,” he said. “And the American people paid the price for our shortcomings.”

When asked if the 2% inflation target is too low, Kashkari said he has not seen “any evidence” of support for a 3% or 4% target.

“How could we raise our target before we even reach it?”

Indicators
In economic data, initial jobless claims climbed to 744,000 on a seasonally adjusted annual basis in the week ended April 3 from a revised 728,000 a week earlier, the Labor Department reported Thursday.

“The recent rise in claims stands in contrast to almost all other readings of the labor market at present,” according to Sarah House, senior economist at Wells Fargo Securities. “There is little to suggest that the labor market recovery is once again stalling, let alone backsliding, as recent claims figures hint.”

Continued claims decreased to 3.734 million in the week ended March 27 from a downwardly revised 3.750 million a week earlier, initially reported as 3.794 million.

“The increase over the past two weeks was enough to nudge the four-week average up for the first time since January of this year,” House said. “For all the issues surrounding claims filings this past year, their recalcitrance is a reminder that the labor market is far from fully healed.”

With more vaccinations and “ample policy support,” claims should drop in the near future.

“As seasonal adjustments, reopening, and the recent stimulus package begin to more heavily impact the data, we need to get used to this volatility,” Insight’s Ruesterholz, said. “These distortions increase the noise and uncertainty.”

Lynne Funk and Chip Barnett contributed to this report.