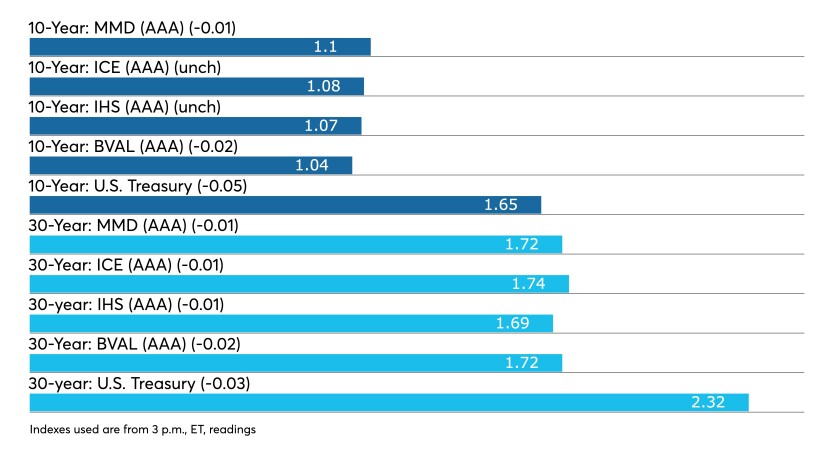 The theme of low supply, positive inflows and the anticipation of higher tax rates led triple-A benchmarks firmer by one to two basis points.

The general lack of supply relative to demand and potential for higher taxes are the biggest factors driving the municipal market right now, according to Jason Ware, managing director and head trader at 280 Capital Markets in San Francisco.

“Tax-exempt municipals are outperforming Treasuries as quarter two starts,” he said on Tuesday.

Many large institutional investors are on the sidelines awaiting significant new issuance to enter the market, according to Ware.

“Funds have been sitting on cash and have not been deploying it in the secondary market — waiting for new issues — but the new-issue consistency is not enough to put pressure on higher yields,” he said. “Some money is being put to work, but there is a lot of money out there to buy tax-exempt product right now.”

As a result of the supply constraints in new and secondary volume, new deals are met with strong demand and are largely oversubscribed, he said.

At the same time, the potential for higher taxes is both creating uncertainty and opportunity, Ware noted.

“In the second quarter, people are going to be hypersensitive to the news and government hashing out a deal and what that means for taxes is going to be important for tax-exempt munis,” he said.

“It’s in people’s minds that taxes are going to have to go up,” in large states, such as California and New York, according to Ware.

The potential for higher taxes is creating enhanced demand for tax-exempt munis, he noted, and contributing to why yields are strongly outperforming Treasuries.

This trend was evident in the first quarter, when the market saw “pockets of weakness” that created selling pressure and caused the market to sell off, he noted.

Ware said a lot of that was driven by the swiftness by which interest rates rose.

“People didn’t want to catch a falling knife, so they were sitting on the sidelines,” he said.

“There were many days in quarter one where munis tremendously outperformed Treasuries,” he said. “The beginning of this quarter has also seen some Treasury weakness, with the MMD scale unchanged, or cut a little,” he added.

Ware expects higher yields to continue in the second quarter.

“Tax-exempt spreads are a little wider than the first quarter, and yields are higher, but taxable munis have had a lot more pain in this higher rate environment than tax exempts,” Ware said.

Looking at the rating breakdown of taxable municipals within the larger Bloomberg Barclays U.S. Aggregate Index (LBUSSTAT Index), i.e., municipals sold with corporate CUSIPs, the bonds with BBB ratings have had the greatest spread tightening, with compression of 80 basis points over the past six months, equal to 1.4 standard deviations, Kazatsky said.

The single-A credit bucket, into which the San Francisco International Airport falls (set to price $224 million of taxables Wednesday), has had the second-highest spread compression, with bonds tightening by 34 basis points, or 1.2 standard deviations over the past six months, Kazatsky wrote.

“Much of the movement in taxable muni bonds has come from consistent demand from domestic and overseas buyers,” he said.

The supply-demand imbalance is still impacting the market, trading volume hit record-setting levels in March, according to MarketAxess.

The international financial technology company that operates an electronic trading platform has reported March trading volumes of $689.6 billion, consisting of $293 billion in credit volume and $397 billion in rates volume.

The total trading volume for municipal bonds in March was $2.1 billion, according to the firm, which also provides market data and post-trade services.

Miami-Dade County, Florida, is set to price $622.2 million of water and sewer system revenue bonds on Thursday. Banc of America Securities is the lead.

San Francisco Airport Commission is set to price $560.1 million of second series revenue refunding bonds on behalf of the San Francisco International Airport on Wednesday. Series 2021A is subject to the alternative minimum tax, while 2021B is non-AMT. Series 2021C is taxable. Goldman Sachs is the bookrunner.

The University of Southern California will sell $400 million of taxable bonds (Aa1/AA// ) on Wednesday. The taxable bullet structure is 2051 subject to a make-whole call. Barclays Capital is the bookrunner.

The Board of Regents of the University of Texas System is set to sell $400 million of refunding revenue financing system bonds, maturing as serials from 2027 to 2051. Wells Fargo Securities is the lead.

The CSCDA Community Improvement Authority is set to price $326.5 million of essential housing revenue bonds on behalf of the Altana-Glendale project. Goldman Sachs is the bookrunner.

The California Health Facilities Financing Authority is set to price $217 million of refunding revenue bonds on behalf of the Lucile Salter Packard Children’s Hospital at Stanford on Thursday. Morgan Stanley is the lead.

The East Side Union, California, High School District is set to sell $127.3 million of general obligation bonds on Wednesday.

Louisiana is set to sell $227 million of general obligation bonds on Wednesday.