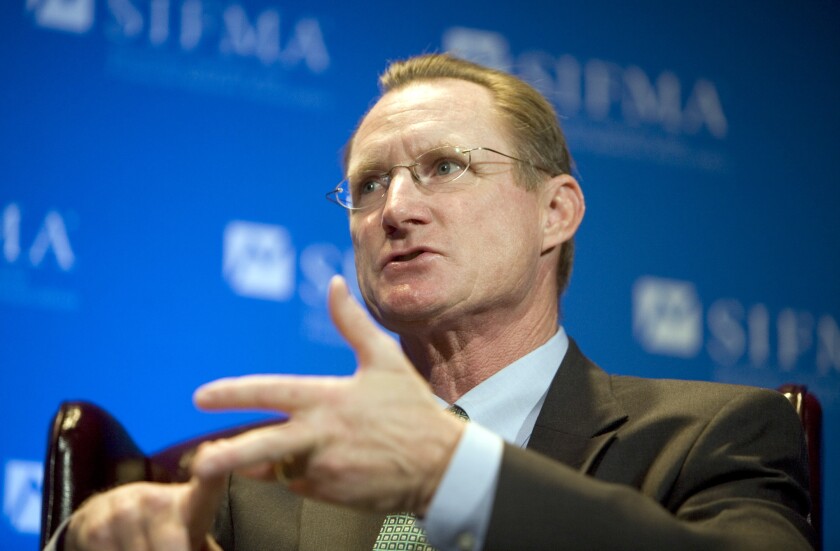 Many states are taking advantage of federal aid and higher than projected revenues by putting the money to work on infrastructure.

The pandemic hit all issuers differently.

In the case of Florida, the state faced a total shortfall of $4 billion over two years because of the pandemic, Ben Watkins, Florida’s director of the Division of Bond Finance, said during The Bond Buyer’s National Outlook Conference Wednesday. However recent funds from the American Rescue Plan Act and the coronavirus relief bill from a year ago made the Sunshine State break even, and then some.

“Now we’ve got $10 billion raining out of the sky under ARPA that we’ll be able to take advantage of,” Watkins said. “That’s largely been programmed in for infrastructure programs.”

In March, Florida’s Republican governor, Ron DeSantis, sent a letter to the Florida Senate president and Speaker of the House on how to use those funds.

“The Governor’s recommendations include providing assistance to Floridians in need, and making major investments in critical areas such as infrastructure, education, and workforce development to continue Florida’s rapid economic recovery,” his office wrote.

The state’s Resilience Florida Grant Program, which gives state and local grants for resilience projects, will receive $1 billion under DeSantis’ recommendation. Another $1 billion will go towards resilience infrastructure under its Emergency Management Response Fund.

In Colorado, House and Senate leadership and Democratic Governor Jared Polis announced on March 10 a recovery plan to invest $700 million to revitalize its infrastructure.

“The plan will be financed by one-time dollars that are available as a result of improved economic projections for the FY 2020-2021 budget year,” the state wrote.

That $700 million comes from unexpected tax revenue, according to multiple news reports.

Stateline, an initiative of The Pew Charitable Trusts, reported this week that many states were surprised to find revenues come in higher than projected and that infrastructure has been at the forefront of spending. Colorado is projecting at least $1 billion in unexpected tax revenue, Stateline said.

The Government Finance Officers Association sent out an alert to members after the passage of this month’s relief bill. The group noted the funds were non-recurring, so should be used mostly for non-recurring expenditures.

“Investment in critical infrastructure is a particularly well suited used of ARPA funds because it is a non-recurring expenditure that can be targeted to strategically important long-term assets that provide benefits over many years,” GFOA wrote. “However, care should be taken to assess any on-going operating costs that may be associated with the project.”

The American Rescue Plan Act included $350 billion for state and local governments. Those municipalities have until Dec. 31, 2024 to use those funds.

At an event in Pittsburgh Wednesday, Biden said there was “no reason” infrastructure can’t be bipartisan. He also said he was open to suggestions on how to pay for his American Jobs Plan. Biden had suggested that part of it be paid for through an increase in the corporate tax rate to 28%, which Republicans have been against.

“The divisions in the moment shouldn’t stop us from doing the right thing for the future,” Biden said.

If bipartisanship is not achieved, an infrastructure bill could be passed through reconciliation, which requires just a simple majority in the Senate. It’s a tool that allows lawmakers to conform tax and spending levels to the levels set in a budget resolution.

The increased corporate tax rate means a likelihood of an infrastructure bill going through the reconciliation process, Jeff Davis, senior fellow at the Eno Center for Transportation and editor of Eno Transportation Weekly, said during a webinar Thursday.

“The choice of a $2 trillion corporate tax increase as your pay for strongly implies, in my opinion, that they’re going for a 50 vote plus Vice President Harris strategy to get this thing to the Senate, instead of the 60 vote strategy,” Davis said. “I cannot for the life of me think of ten Senate Republicans who will be solidly for a $2 trillion corporate tax increase.”

However, reconciliation means that lawmakers likely can’t do a reauthorization of surface transportation legislation.

Surface transportation reauthorization was not mentioned in Biden’s plan, said Jim Tymon, executive director of the American Association of State Highway and Transportation Officials. AASHTO is waiting to hear how that would unfold.

The plan did get pushback from key stakeholders.

“We need a big and bold program to modernize our nation’s crumbling infrastructure and we applaud the Biden administration for making infrastructure a top priority,” said Neil Bradley, the Chamber’s executive vice president and chief policy officer, “However, we believe the proposal is dangerously misguided when it comes to how to pay for infrastructure.”