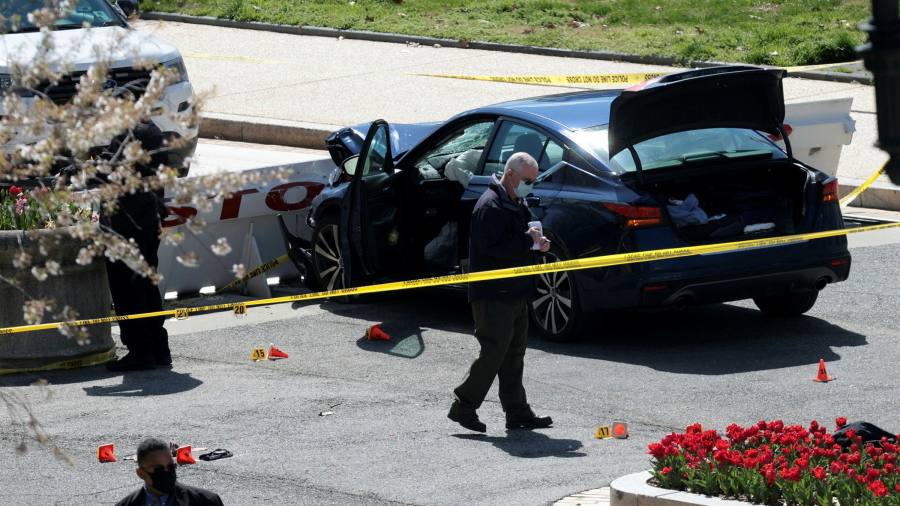 A police officer died along with the driver of a vehicle that rammed barricades at the US Capitol Building on Friday, provoking a lockdown at the seat of Congress.

Yogananda Pittman, acting chief of the United States Capitol Police, said a suspect and one of the force’s officers were dead while a second officer was taken to hospital after the incident, which happened just after 1pm local time.

“The suspect rammed his car into two of our officers, and then hit the north barricade barrier. At such time the suspect exited the vehicle with a knife in hand,” she said in a press briefing.

Pittman said the suspect did not respond to verbal commands and was shot by police after lunging towards them.

The attack against US Capitol Police on Friday comes less than three months after the January 6 assault on Congress by pro-Trump supporters trying to block the certification of Joe Biden’s victory in the 2020 presidential election. One Capitol Police officer was killed after sustaining injuries during the assault, while two more Capitol Police officers who responded to the attack died by suicide in the following days.

The officer who died was named as William Evans, who had served on the Capitol Police since 2003 and was a member of its first responders unit.

Metropolitan Police chief Robert Contee said his force was looking into the motive of this “senseless act” and added there did not appear to be a continuing threat.

Anthony Coley, a spokesperson for the Department of Justice, said US attorney-general Merrick Garland was “actively monitoring” the situation.

President Joe Biden had just arrived at Camp David, the presidential retreat in Maryland, when the attack occurred. Congress is on recess, so many lawmakers and their staffers were not around at the time of the attack.

In a White House statement, Biden said he was receiving regular updates on the incident, thanked the forces and emergency services for their rapid response and expressed his condolences to the Evans family. “We know what a difficult time this has been for the Capitol, everyone who works there, and those who protect it,” the US president said.

The District of Columbia National Guard deployed an Immediate Reaction Force in response to the attack, providing a much faster response in support of the US Capitol Police than the military reserve did during the January 6 assault. It did not disclose any further details but said none of its officers had been hurt.

The IRF was already stationed at the Capitol among 2,300 National Guard personnel who have continued to guard the capital since security was increased after the January 6 assault.

Immediately after Friday’s attack, members of Congress expressed gratitude towards the US Capitol Police, but dismay at the latest episode of violence against the US legislature.

“It has become clear the Capitol is increasingly seen as a target. In that context I believe it is important that we review all security provisions thoroughly and take responsive measures that should prove necessary,” said Dianne Feinstein, the Democratic senator from California.